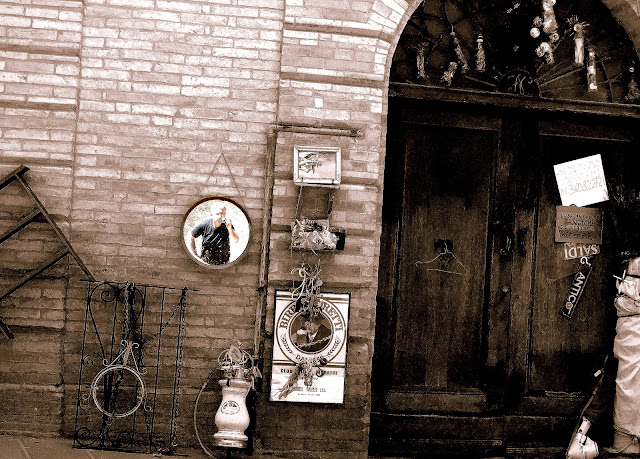 [above:outside a junk shop in Lanciano]
Can I point you in the direction of the Koast to Koast Kaz Fund.It's a sponsorship journey through Northern England in memory of Kaz. who died in March.Money raised  by blog following fan Rodger will go to the Ovarian Cancer Charity.Please give here if you can.
Kaz was a Lovely Liverpool Lass  (+ Everton supporter) who lived in Manchester & was a daily commentator here.,back in the day.Sail On Beautiful Lady.
I am now back in Hebden Bridge..I flew back into Leeds Bradford Airport at 3pm on Thursday.By 8pm Me & Cathy were sat in Bury Met watching The Fairports [[my photos:] A jet-setting Rock N Roll lifestyle non? Thanks To Don & Margaret.
I'm very tired.Apologies to Ex-Cappo Martin & those at the hammam.I was due to go to Tony Ts Birthday meal late last night..but far too knackered.
Work progresses on my place in Abruzzo
.But so much still to do.I seemed overwhelming at times . View Some Of My Photos Thunder in the Mountains over last weekend  forced me to stay inside and work.I stayed 4 nights  in the house .I want to get to a stage where it is fit for friends (eg Phil The Ex-Fireman) to be able to come over and help......but until the basics are in place I wouldn't want them to have to stay in a total tip.It's nearly ready to invite them over.Me & several people should be going over next month.
The village is very quiet.I found it quite spooky staying on my own there.I was alone for 90% of the time.Although can I thank Sora for feeding me one day (the best Dutch Risotto I have ever tasted!:).Sora is staying 3 weeks at Iona's house in the village.
I also met up with Mick Goggins& his his new squeeze Shelley.
I spent the best part of Wednesday in Lanciano sorting out paperwork .A special thanks to Massimo at the Bank for ,with great patience,walking me through the dark art of Italian Internet Banking.Also to Piero who explained & sorted  my Water,Electric & Council paperwork.Both are good teachers!
here are a few photos I took this time in Italy.

It's Bob Dylan's 70th Birthday next week.Out of respect for His Bobness, here is a video I took in Hebden Bridge at the recent anti-royalist street party.A band (i know not who) sing the opening riffs of 'All Along The Watchtower.''


P.S. Don.I bought a copy today of "Grateful Dead:Broadcasting Live" DVD if you don't have, I will runoff copies.We watched it tonight (2 discs) Rather suburb! A stunning "Knocking On Heaven's Door".
Finally.I just found this video on Youtube. It was posted 3 days ago. I minute of ".....the only known (existing) professionally filmed Sandy Denny footage with Fairport Convention...."Enjoy & Weep. 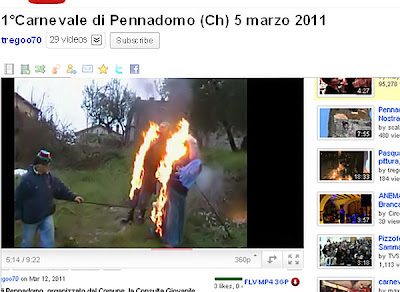 Finally............I found this rather strange carnival video from the village in which my house is ! Check the video here
It's an Isolated mountain region.Cut-off historically from the rest of Italy.Frankly, it shows that here...........!
Shot  in March this year.............looks like some outakes from  The Wickerman

Pennadomo :Wikipedia
P.S. watch the News over the next couple of weeks.Italy is about to come the next Southern European country to go belly-up financially. Remember.You heard it first here!