All Aboard The Brighton Line 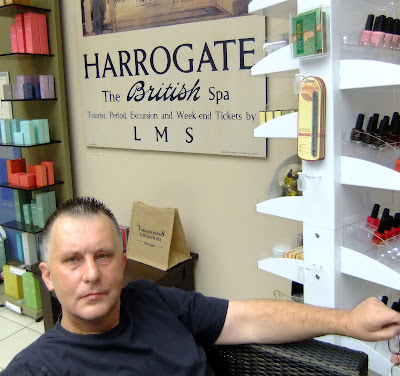 It's My Birthday today! Looks Like I'm travelling The Brighton Line for the next 12 months!
I got to Harrogate Turkish Baths at 9 am this morning.Above is a photo Chris took of me there.
Last night I went with some of the Lads from The Rochdale Hamam for a Birthday Curry in Whitworth.
[This Time next Year Rochdale Turkish Baths Will have been knocked down.I have been going there for 28 years..what will I be  doing  then?]
This afternoon I went with Cath & Chris to The Stubbin Wharfe Pub in Hebden Bridge for a meal.


Postcards From Italy by Beirut
Italian Mick was due to finish my plumbing today in my place in Italy.Now it's already 80% complete (even before today) which might sound fine , but 20% missing  is a worry if you need a "#2" when you go powder your nose, if you get my drift............
Once that's sorted out ,I can invite people over to stay in it + help.Me & Phil The Ex-Fireman should be going over to Pennedomo late August..to start internal decorating.
The 3rd week in September I return again to Abruzzo to help Mick & Shelley with a LA VITA Italian Workshop.

If Push Comes To Shove; I Love This Bit Of Popery Above All Other.Think Of It as A Birthday Gift To Myself.............Is this the power peace
Or merely the connection ?

read about Gene Clark's :"No Other"


My Sepia Saturday post is on my Hebden Bridge blog this week.
.........In Sociology, the Harrogate Effect pertains to occasions where something awful happens to someone in the company of a group, but no one does anything to help. The phenomenon was first observed by the renowned sociologist Jeremy Clarkson on a visit to the town in 1987. On that occasion, a child laid dying in the street whilst Clarkson and a number of the town's residents stood around giving the child a severe ticking off for increasing traffic congestion and lowering house prices. .........[read more]
at July 30, 2011 15 comments: 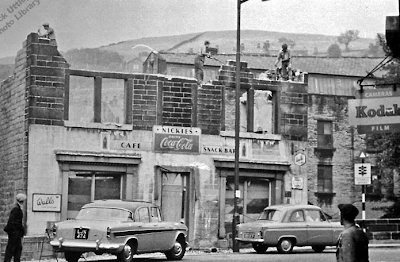 
From:
See Jack's Photos here
Jack Uttley (1918 - 2003)
was born in Heptonstall. He grew up living at Mytholm and later moved to Mythomroyd where he lived for the rest of his life.
At the age of 14, he started work at Maudes Clog Soles, Hebden Bridge where he was employed until his retirement in 1975.
Throughout his life he had a keen interest in photography and, over the years, was fortunate to be given many old photographs in the form of glass plates, postcards, prints and 35mm negatives.
These, together with his own photographs of the local area taken over the period 1950 to 2000 have resulted in a significant collection.
After retirement, he was free to concentrate on his main interests of Photography and Local History. He combined both interests in slide show presentations and illustrated books about the history of the local area.
He was a member of the Hebden Bridge Literary and Scientific Society, The Calder Camera Club and was heavily involved in establishing the Mytholmroyd Historical Society.

To put a selection of the photographs on the internet, it was necessary to give the collection an indentity. We have therefore named it:
"The Jack Uttley Photo Library".

Gravity Is A Wonderful Thing 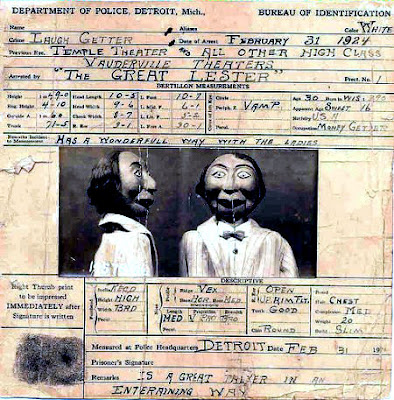 Jeeze.These Images Are Blurry.They Look Like They Have Been Faxed From Outer Space.
The Photo Below Is Of Me & My Big Brother Ziggy.
This Week's Sepia Saturday  theme is in & around the subject of Space Travel.
I have no family photos of such things.West Yorkshire in the 1960's was a tad short of Rockets & such like (except in our heads!)But I remember following all those spacecrafts and stuff......it seemed to me, Russians;Dogs;Americans;Everybody was going up there.I pondered, maybe everyone was going there & pretty soon , I would be left alone here on Earth! Happily , they all seemed to return (in one fashion or another) Gravity Is Such  A Wonderful Thing! 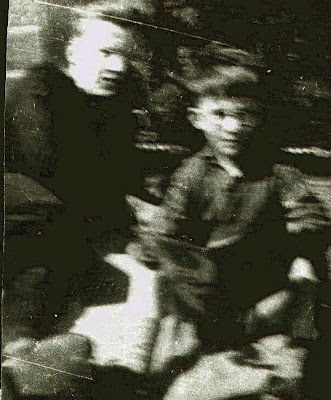 During the Black Hawk War, Abe Lincoln was leading 20 men through a field when he saw they’d need to pass through a narrow gate.


“I could not, for the life of me, remember the proper word of command for getting my company endwise, so that it could pass through the gate,” he later recalled.


“So, as we came near, I shouted, ‘Halt! this company is dismissed for two minutes, when it will fall in again on the other side of the gate.’” 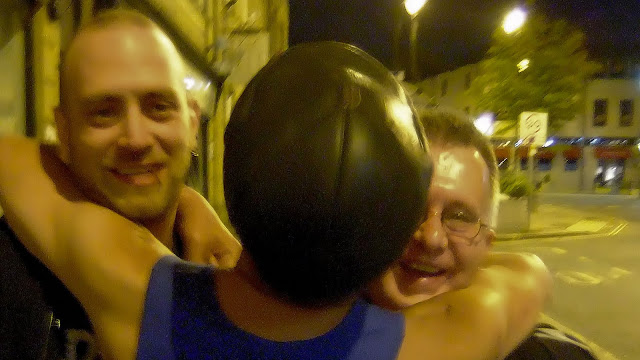 Me,Phil The Ex-Fireman ,Bryn & Mick The Italian went into Halifax tonight for Drinks.here are some photos taken. 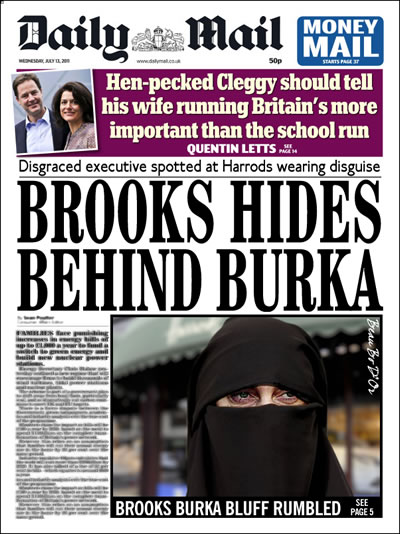 Hacked With Permission & Thanks From ou1
For North American Readers , Here Is Some Of The Backstory.
A Video Chris Made.Nothing To Do with Rupert Murdoch!
at July 14, 2011 4 comments: 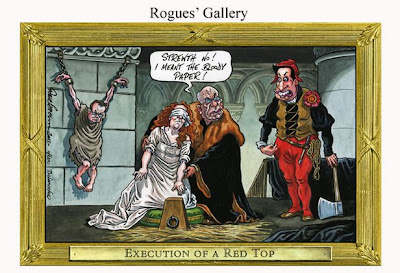 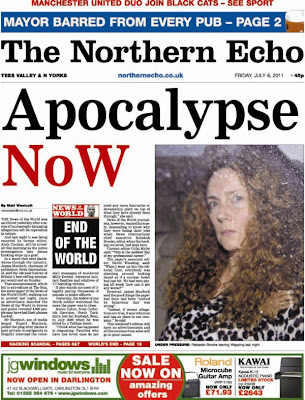 Here Is Rebekah Brooks announcing that the News of the World and the Sun were being integrated: last week.

A first class article  from (of all places!) The Daily Telegraph this (Thursday) morning here.
One of the many thoughts raised was that the reason Cameroon refused to condem (sic) Rebekah Brooks was that she holds too many secrets about the workings of the government machine.Better she is inside the tent pissing out.............?
Can I be the first person to coin,use & copyright the term "Murdochgate"? The comments under the piece are even better (i must have too much time on my hands if I'm reading the Telegraph website !) For example................."The closed world of the Liberal elite now firmly in control of this country has more than a whiff of pre-revolution France about it. They bask in their largesse while we the people are expected to absorb even more pain and misery........."
Orff with their heads...........!but,while we gather our knitting, here is how to Contact advertisers to get them to pull ads from The News Of The World  this Sunday

Jeremy Hunt has just said he'll allow Murdoch to own all of BSkyB. We have just three days to flood the government's public consultation with requests to stop the deal.

We've done it before -- in the last consultation Hunt said our avalanche of 40,000 messages delayed the deal as his officials had to read each email carefully, fearing a legal challenge. But the government is pushing the deal through despite the hacking scandal of murdered Milly Dowler -- the latest grim episode that shows how Murdoch's media tramples standards and ignores ethics.

Murdoch already controls more of our media than is legal in many countries – and is notorious for using his power to skew our politics. The official consultation ends this Friday -- let's tell the government we don't want his media empire to control our largest commercial broadcaster. Send a message now -- using your own words to make it stand out -- calling on Jeremy Hunt and David Cameron to refuse Murdoch's BSkyB deal until there's a full Competition Commission review and a full public inquiry into phone hacking.
If you have a UK postal code, click this Link to an extremely easy way of sending a quick & effective message of protest to The Powers That Be.
at July 05, 2011

beam me up in sepia

This is a Sepia Saturday post.
Only a quicky this week.We are off to Castleton for the weekend to celebrate Kathy & Steve's recent wedding.We Stay   in this posh hotel,The Norton Grange  ! Im looking forward to trying it's Spa.It has an "Ice Room"!While I'm gone ,please ponder (people don't "ponder" near enough these days) 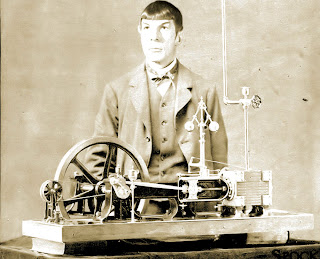 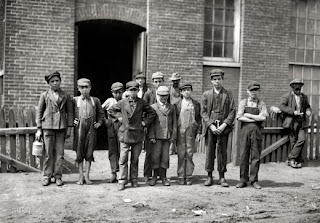 Boy Texting in 1911 [via:]
“Man is the only animal that can remain on friendly terms with the victims he intends to eat until he eats them.” — Samuel Butler
“Man is the only animal that laughs and weeps, for he is the only animal that is struck with the difference between what things are and what they ought to be.” — William Hazlitt
“Homo sapiens is the species that invents symbols in which to invest passion and authority, then forgets that symbols are inventions.” — Joyce Carol Oates
[via:]
Martin,I had a really vivid dream last night.I dream t you owned the (only) Bar in Pennadomo .Me, Haydn ;Phil The Ex-Fireman: et al had arrived in The Village & you had put on a grand spread to welcome us.[I forgot to ask if you served Lemon Tea.!]