retail therapy [shop till you drop]

Visit www.bdsmovement.net to get more info on how you can to support Palestinian commercial rights. 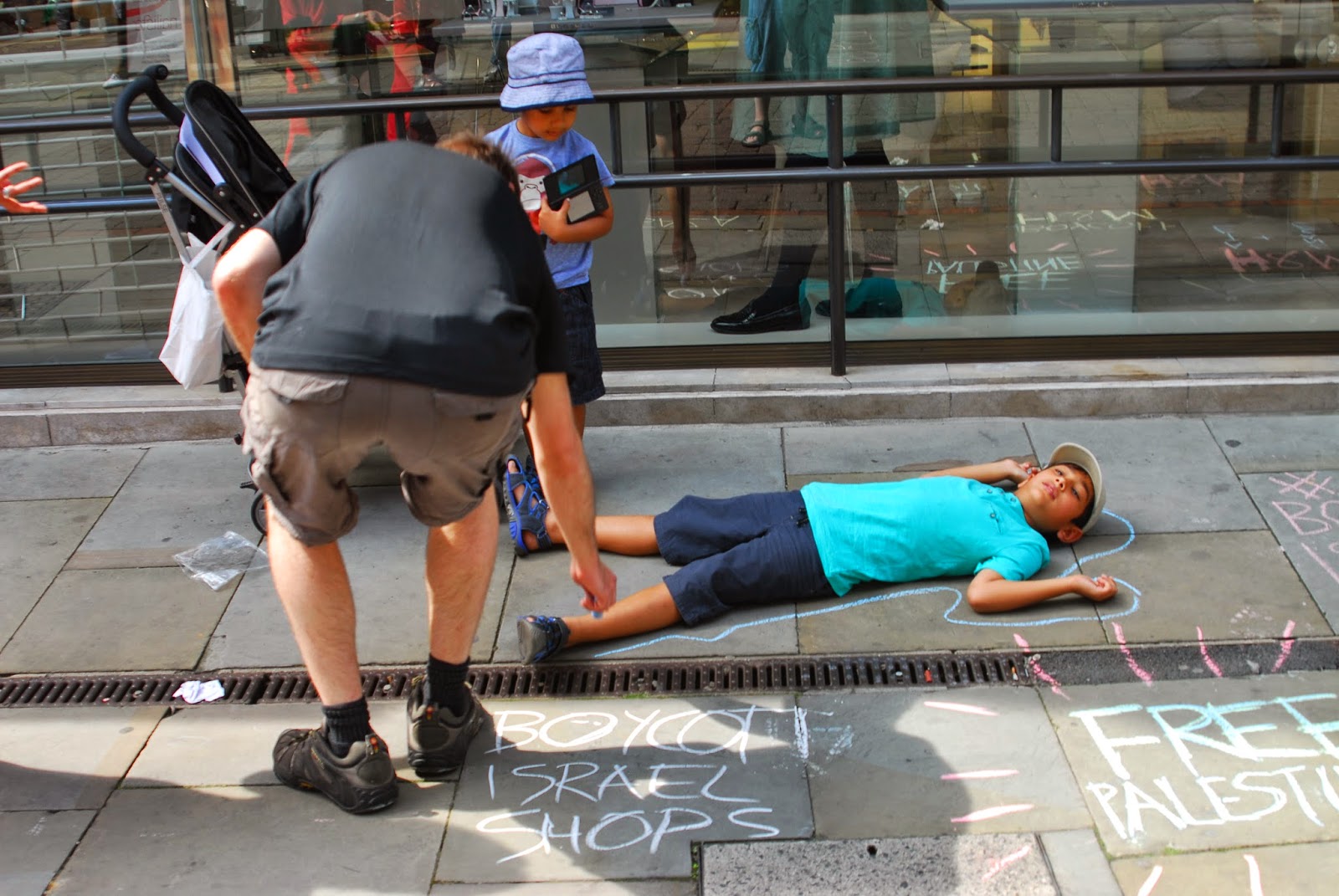 I attended this day of action in Manchester today  to protest about the murder of ,now, 1000 Palestinians by Israel.
Last week had seen an even  larger march in Manchester.
today's march was smaller ,maybe because of the "Direct Action" element?
Today was a walk  through the city centre.Stopping off at Banks & businesses that support Israel.
It ended at the Kedem shop on King Street.
Kedem has now been targetted for 7  days.Today we were met by a couple of hundred people who supported the shop.They waved Israel flags & union jacks and were not happy (they lost another whole day's trade today..Ironically their 'friends' helped to prevent any shoppers going  anywhere near the place)
Kedem is an upmarket beauty product shop that sells stuff made in Israel & sourced from the Dead Sea.
One of the Kedemians  was rather rude to a young Muslim woman who had brought her young children on the protest.
"You should be ashamed of yourself bring children to such a dangerous place" she spat in the Muslims face.Which is rather ironic.Non?
at July 26, 2014

So mournful that the dove just laughs the steadfast gasps 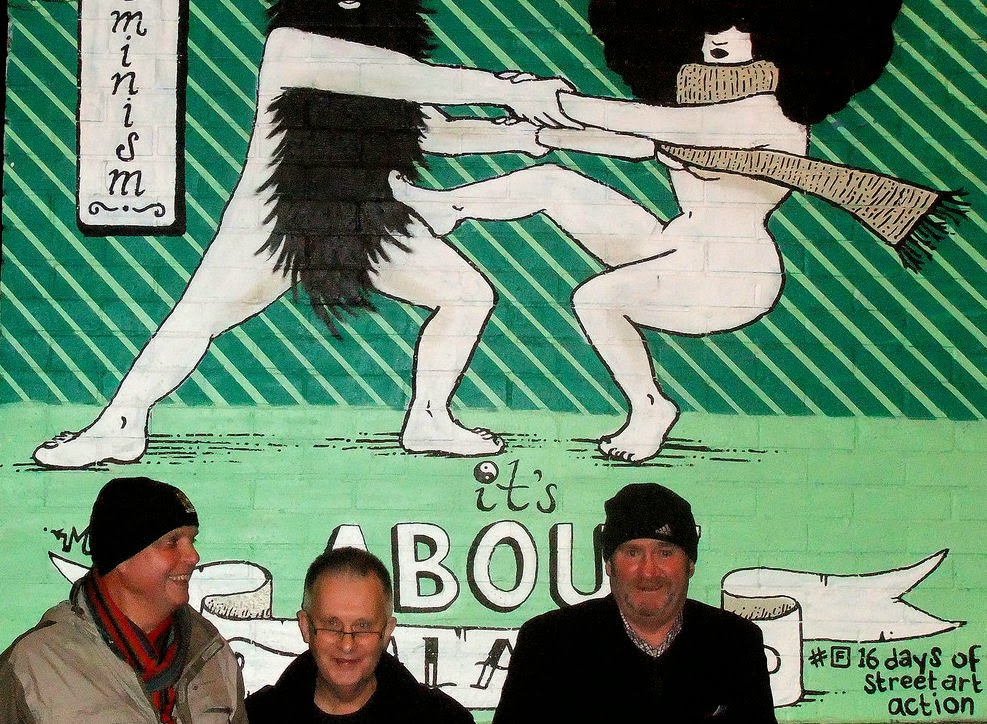 Oh, to be not anyone
Gone this maze of being skin
Oh, to cry not any cry
So mournful that the dove just laughs the steadfast gasps

Oh, to owe not anyone
Nothing to be
Not here but here
Forsaking equatorial bliss

Who walked through the callow mist
Dressed in scraps
Who walked the curve of the world
Whose bone scraped, whose flesh unfurled

Who grieves not, anyone gone to greet lame
The inspired sky amazed to stumble
Where God's get lost
Beneath the southern cross

rocking in the free world 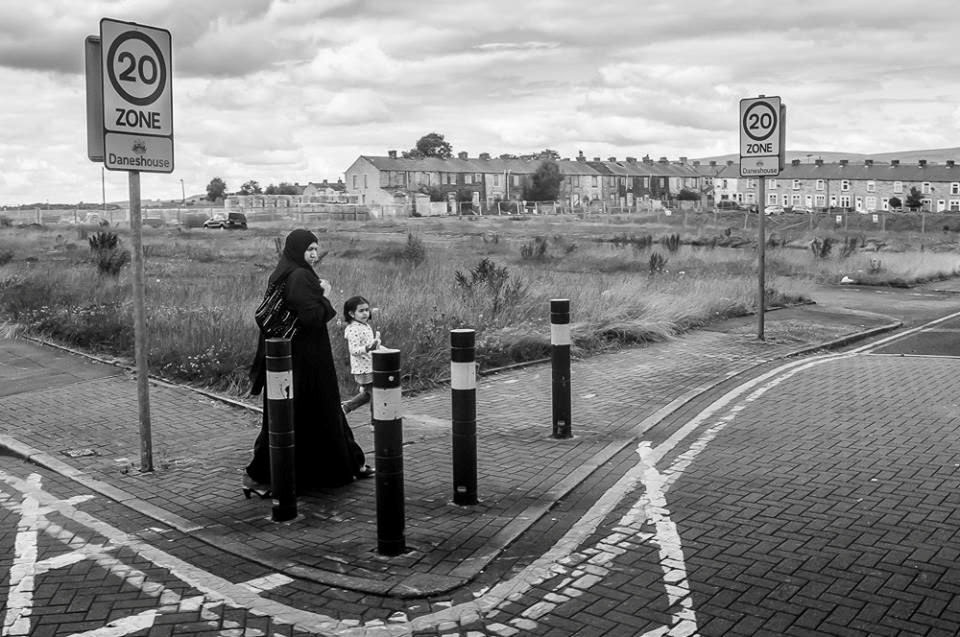 Photo taken in Burnley by Michael H Gregg In the meantime please consider this......
.Neil Young's Israel Concert Cancelled To Not 'Put People In Gaza Rocket Range At Unnecessary Risk'

.Indeed .Poor Zion..
I took these photos in Burnley Municipal Cemetery this morning.
I had given Chris a lift for an Interview he was having with Burnley Council's  Parks & Garden Dept.(he finds the result of this within the next couple of weeks)
Quite a surreal place to have a job interview ! But a pleasant wait for me.

Burnley has it's own muslim area of burial.
This morning I  said  prayers for the murdered innocent men,women & children of  the current  Gaza Ghetto Uprising
May they rest in peace
& may their Israeli murders find some apropriate  punishment. somewhere down the line.....
Plus,Burnley has  a fine War Memorial for the British dead in two World Wars
.Also,a surprise, a memorial for The Hapton Valley Colliery Disaster 1962
To my shame,I had never known about.......

The new Hapton Valley Colliery soon acquired the name Spa Pit on account of the discovery of a mineral spring around 1818 by Ambrose Eastwood a local farmer. The spring was close by the new pit, and the name adopted. The method of coal extraction at this time at Hapton Valley would have been by pick and shovel working the pillar and stall method of extraction........
....The most fateful day in the collieries history of course was the disaster of March 22 nd. 1962, when a total of nineteen men perished...........
"The Ship Song" Nick Cave: Live at the Admiralspalast, Berlin, Germany; February 13, 2013.
at July 18, 2014

Ciao Pennadomo! Possiedo Via Caldora n.43.
I currently work three days a week. (Monday/Tuesday/Wednesday).So when I approached my line manager  recently to ask if "I may work Thursday 10th July in order to go on Strike" She thought it a pretty fucking stupid idea.
Which i guess it was!
Anyway,today i wasn't technically  withdrawing my labour...But I was there anyway.

Post by Tony Zimnoch.
JOHN MARTYN "May You Never" Live at the Teatro Antoniano, Bologna, Italy; May 18, 1977. John Martyn ,you will recall, pissed on my shoes in a gents toilet in Liverpool in 1979.Read all about it[ here ] 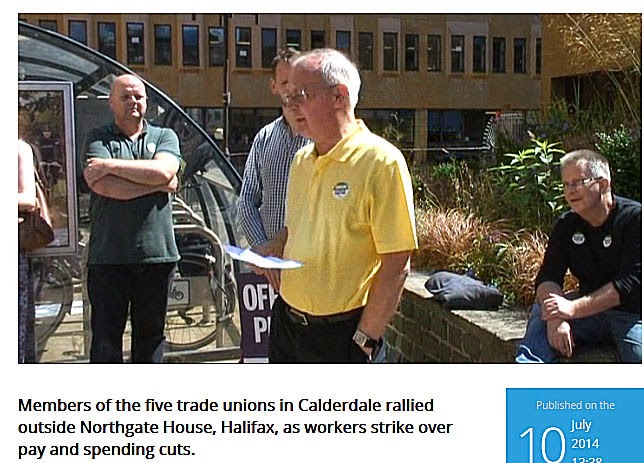 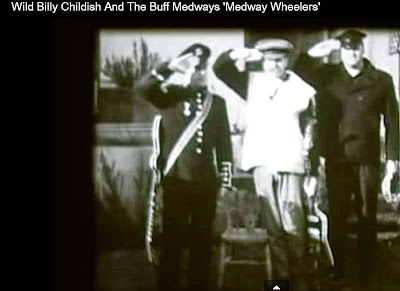 Squeeze:Live at the O2 Academy, Glasgow, Scotland; November 23, 2010. [soundboard]
Me & Cath spent a couple of days in Harrogate.We returned home tonight.
Harrogatians  are gearing up for the Tour De France, which starts tomorrow
Here are a few of my photos.
The Tour comes near  my house in Hebden Bridge on Sunday.Hopefully some more photos from that next week?

We stopped in the St George's Hotel
[On the other side of the road, was where we saw T-Bone Burnett & Elvis Costello play live at in The Royal Hall on the 9th November 1984 .]
Tonight the same room will cost some poor soul  £325 per night!(Le Tour goes through Harrogate both days.It's something of a "hub")
Plus,my house is 50 yards from the Hebden Bridge route on Sunday,what a shame I didnt get me a UKIP flag during the recent elections.Had I one,I would wave it with vigour this weekend....
This weekend in Yorkshire Bike Riding appears to be "the new Rock & Roll" (as opposed to football or tennis...*sniggers*) Only fair then,I should share the best ever Rock N Roll video about Cycling.I give you Wild Billy Childish and The Buff Medways...............

We have talk of 30,000 folk turning up in Hebden Bridge on Sunday to watch the tour de france.Hebden Bridge is known as "the lesbian capital of Britain".It is illegal for women to take part in the Tour.[DISCUSS] [above-press to play]Elvis Presley/Heartbreak Hotel:Live at the Freedom Hall, Johnson City, Tennessee; March 17, 1976.
n.b. you can hear the entire (good quality) Johnson City 1976 concert here
at July 04, 2014