“As you start to walk on the way, the way appears" :Rumiی

This week's sepia saturday theme is around "Parades". I share a photo below  of The Halifax  Charity Gala Parade sometime in the70's.
I was a Samartian Volunteer for 7 years in Halifax. ( n.b.The Samaritans are a suicide support line)
You can read much more  about that here
During my searches for this post I  also came across This
wonderful video of 1950's Halifax.Included (17 minutes in ) is the Gala Parade through the town center  and at Manor Heath..Copyright prevents me from embedding here, but it's worth a view here http://www.yorkshirefilmarchive.com/film/civil-defence-exercise-etc
جلال‌الدین محمد رومی


This is a sepia saturday post
I told you two  weeks ago that  we were attending  the funeral of Sue Trigg in Fixby.
What I havnt told you is that i missread the details of when the service was to be held ( despite me putting the Huddersfield Examiner's online Obituary on this blog!)
As a result ,we did go to Fixby Crematorium.
We did attend at 2pm on Friday
But, It turns out  ,I got the week wrong and we attended on Friday 13th (not Friday 20th).
To compound the mistake ,we followed the mourners into the 2pm service.
Now I wasnt surprised not to recognise any of the fellow mourners.
I knew Sue from 50 years ago at School plus our various much more recent  1- to -1 meetings had been at Hebden Bridge Trades club.We  know none of her family or none of her more recent friends.
So . Me & Cath are sat at the back of the room at Fixby Crematorium on Friday 13th.
The only speaker was a Polish Priest who talked for about 5 minutes...but his accent was soo thick that I only understood about 10% of anything he said.
Although,halfway through,he did say "JILL" which set a few alarm bell ringing........
No family members spoke. So after a short service I went to the coffin ( no photo on it). Touched the coffin. Made the sign of the cross and we followed the other mourners out the door and down a corridor.
I then shook hands with the priest, who was stood next to the framed photo of a beautiful elderly lady called (you guest it!) JILL. Me and Cath left blushing to avoid upsetting  to our fellow mourners......
I had never been to Fixby Crem before,so at least it turned out to be a 'rehearsal ' for Sue's funeral today.Although ,are not all funerals "rehersals" really? 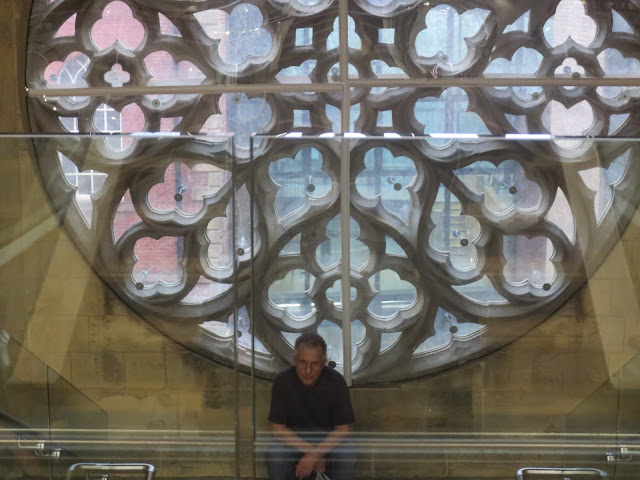 Sue's funeral was packed today.Very moving ,and a great tribute to such a grand lass.
Lots of music! As we entered the service we were greeted by Santana playing "She's not there" playing full blast.
I couldnt help thinking that Sue ,sat in the sky,was looking down on me and taking the piss about my adventures the previous week !
During the service,the vicar asked the mourners to give Sue's  coffin a round of applause ( a new one on me).
Her service concluded with John Martyn singing "Somewhere Over The Rainbow".
Now,the previous week i had taken this photo of a rainbow over the crematorium.Maybe this was the real purpose of my mistaken visit to Jill the previous week? one Door Shuts:  Another One Opens I Guess....... 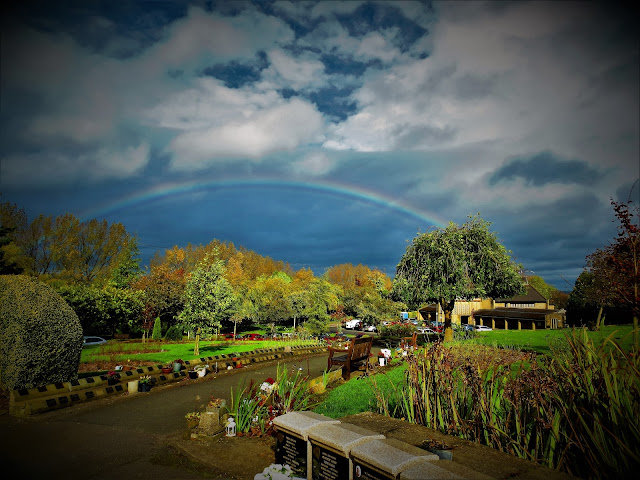 " the shortest poem is a name" Anne Michaels.

Me and Cathy went into Manchester's Literature Festival yesterday. We attended a talk by  the mighty Canadian writer Anne Micheals.
Then, on Friday 20th October., we pay respect at Sue Trigg's funeral in Fixby. I went to Clare Hall School in Halifax, with dear sweet Sue.....
On Saturday night,we go to The Shay in Halifax for Dave's 60th Birthday. Also .This week. We have  had a very firm legal offer for our home in Hebden Bridge!

Two media folk from London.
One ( 3rd right) works on several big shows.Including BBC's "The Apprentice".
Lots of detail to sort out (eg where we move too!) Watch this space!


I have to say, I am wondering what lovely music will be played at Sue's cremation on Friday.......

if they wont let us dream,we wont let them sleep...


Until I retired last month,I worked with Mark Wyatt at Calderdale Council.
Here is a clip  of him singing on Sunday 1st October in Manchester with the commoners choir

Part protest against the Tory Conference being held in the city:part a dance on the grave of those UKIP cunts. ..........