Sometimes Hebden Bridge tries too hard:Sometimes it becomes a parody of itself.......... 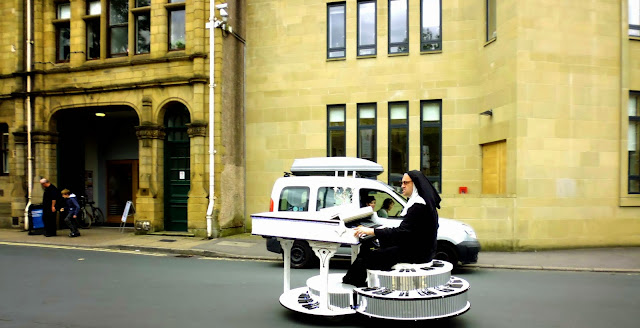 here are some random photos taken in Hebden Bridge today.
+Me and Cath went to the Birchcliffe Centre.Can I say some nice things about PoesCeramics.Very Good & Very Well Priced.Buy ALL Your Christmas Presents from them this year!


Really Nice To See Bob from Bacup  & Noj & John & Jim in Hebden Bridge at The Eastern Spice with Ken & Phil the X-Fireman.Thank You All.Again soon I think. I am blessed with friendship.

The main audio is Steve Winwood recorded Live at the Telluride Bluegrass Festival, Telluride, CO; June 20, 2014.Just 7 days ago!{An old Blind Faith song ,as I recall....] The second audio here (press to play) is Fleetwood Mac/ Peter Green live in New Orleans,; January 30, 1970.Who knows where the time goes...?
Finally. I've been really interested in Edinburgh's Young Fathers.They first appeared to me in January.They are so good.I love everything about them.
They are trying to break America.Good Luck Guys!The Music they make is rather special........If you like what you hear,give me a shout & I will run you off a copy of the latest album.The ghost of Jackie Leven lives on!

Image by Arthur Tress.
Audio by  The Byrds "The past is not just a foreign country, but also one we are all exiled from. Like all exiles, we sometimes long to return. That longing is called nostalgia. Whether it is triggered by a photograph, a first kiss or a treasured possession, nostalgia evokes a particular sense of time or place. We all know the feeling: a sweet sadness for what is gone, in colours that are invariably sepia-toned, rose-tinted, or stained with evening sunlight.


The term “nostalgia” was coined by Swiss physicians in the late 1600s to signify a certain kind of homesickness among soldiers. Nowadays we know it encompasses more than just homesickness (or indeed Swiss soldiers)......." {read more}

{Don ;a mile & a half today in Halifax swimming pool! a personal best! hurray!} 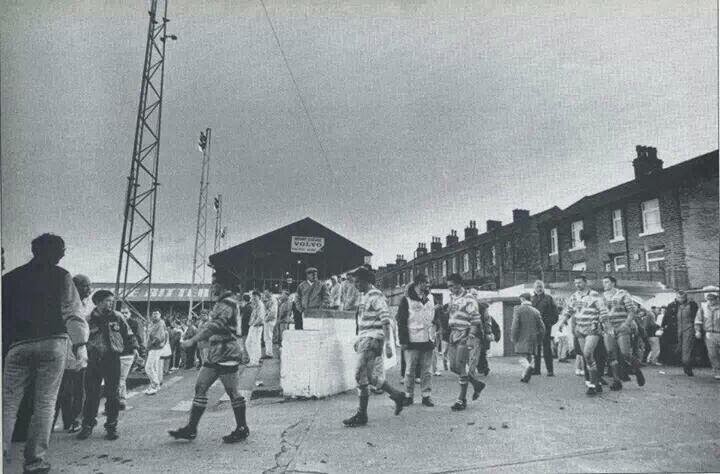 I'm "off-on one" again........This,I can confidently say, is the only blog in the whole wide world that you will ever experience (in a single post!)  combined memories of 1960/70/80's Rugby League: an audio of good+rare live  Americana music (the late Levon Helm):the existential angst of late 17th century Swiss soldiers: 14th century Persian poetry:the early days of Dr Who; a critiqe of British kitchen sink movies of 1963;a positive Muslim spin (in these rather stupid Islamaphobic days.....) :and good toilet etiquette while visiting the Ladies in Asda's loo in Halifax.Good for me ...Hurray!
Khwāja Shams-ud-Dīn Muhammad Hāfez-e Shīrāzī (Pesian خواجه شمس‌‌الدین محمد حافظ شیرازی‎), known by his pen name Hāfez (حافظ; also Hāfiz; 1325/26–1389/90), was a Persian poet.
His collected works are regarded as a pinnacle of Persian literature and are to be found in the homes of most people in Iran. who learn his poems by heart and use them as proverbs and sayings to this day. His life and poems have been the subject of much analysis, commentary and interpretation, influencing post-fourteenth century Persian writing more than any other author...........[ wikipedia]
This Sporting Life:Rotten Tomatoes


You can  listen here to The Rugby League Oral History Project's entry on Thrum Hall. .
Maybe you might also read the wikipedia entry on Thrum Hall.
When Alan described this week's Theme, he suggested it might be "...... one thing on top of another. It's straight lines fading into infinity. It's the stations of the cross. It's whatever you want it to be...".
I chose to interpret it  as this one   location, but at  different times.
The composition of these photos are by no means exact .for example,they are not at  the  same angle.But they are near enough.(nb had i stood today in  the exact spot, I would have had to whip my camera out & stand  ontop of  a toilet  seat in Asda'a Ladies lavvy!)
Its all quite near enough tho.The terrace housing you see in the 3nd photo is part of the same terrace you also see in the 4th photo.
The 3nd  photo was taken in 1979.The 4th photo i took this afternoon at Asda supermarket in Halifax.
Objectively, 2 totally different scenes.Only someone old enough to remember the Thrum Hall Rugby League ground would know it had ever been there.
I find it very strange how my architecture keeps evaporating.I always expected people I knew to die and disapear from me .I never (for some reason) expected my physical world to disapear like smoke too..
(I've already mentioned here the importance of Thrum Hall to me. ...........) 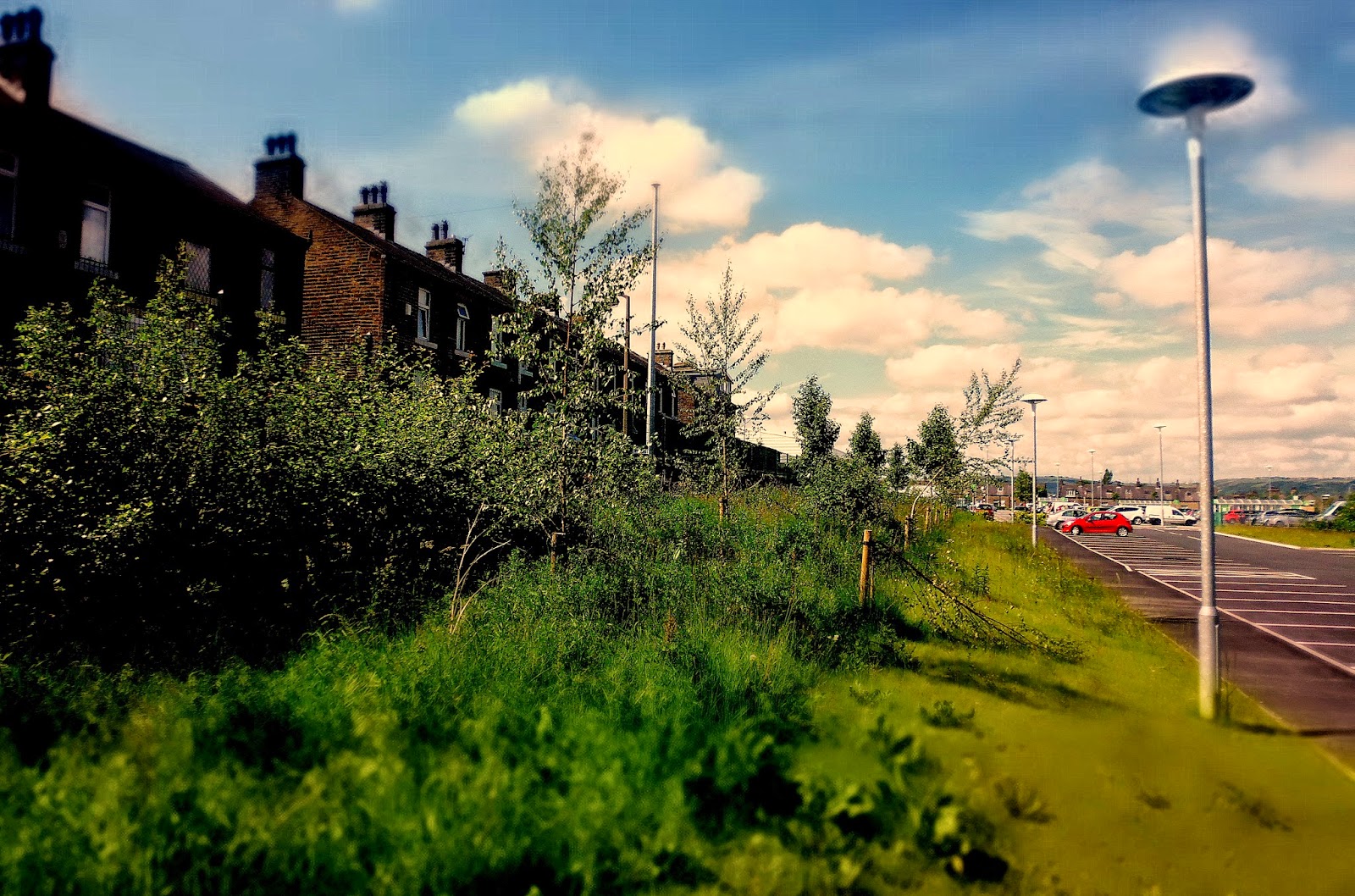 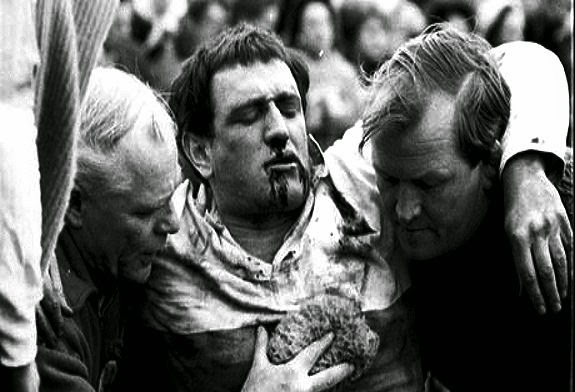 
A cool couple of days.I went to see John Renbourne & Wizz Jones at the Band on The Wall in Manchester on Thursday night with Cath,Don & Margaret.
Then on Friday me & Cath went to Sowerby Bridge for a Work's knees-up. Some pictures. Clive.Thanks for the mail.I will reply & also send three Blackbushes!
at June 07, 2014