I am 61 on Tuesday.
If you want to help me celebrate you might want to know I am PAYPAL;WONGA & CHURCH of ENGLAND ®. compliant.
To celebrate my birthday, British Sea Power rode into Hebden Bridge on Friday.(they brought a couple of their Bi_Polar Bears with them!) See my photos HERE 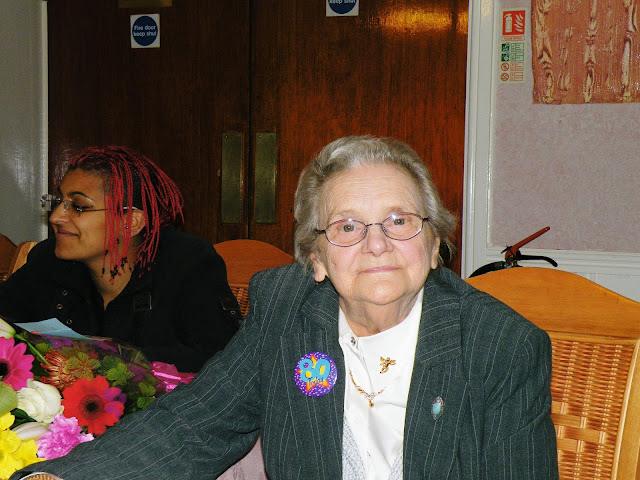 Madge Davidson died at 9pm last night at her home in Halifax.
She would have been 83 in September.
I have known her  since 1963 (she is the mother of Phil).
Rest In Peace Lovely Lady.
here are some photos from her 80th Birthday...almost 3 years ago.
at July 25, 2013

Royal Babylon: The Criminal Record of the British Monarchy
“Heathcote Williams has devised a form of polemical poetry that is unique” Peter Whitfield, author of ‘The History of English Poetry’ “I admire a poetry that is no-holds-barred personal and political. Heathcote Williams’ serial poem ‘Royal Babylon in the relaunched International Times is proper political poetry” NIall McDevitt in the Morning Star “It’s a phenomenal piece of work” Jeremy Hardy “Where are the Poetry Police when we need them ?” JC/Times Literary Supplement
www.royalbabylon.com Above are some of my weekend's photos.
at July 23, 2013 3 comments:

It's been warm here in Blighty.Hot nights:vivid dreams.
Have you ever dreamed people? People who,in the dream,you think know intimately .You seem to comprehend their back-story & they  yours.
Not just one person ,maybe dozens, a searing mass of characters before your eyes .You are best buddies with  them all!
And have you ever woken & realized this knowing was an illusion.Rather sad when a friend becomes a stranger in an instant.When a meeting becomes only a theatricality.........
I was always surprised I had sufficient imagination to create a whole cast of characters out of thin air......Then recently on the radio I heard another explanation .It was suggested we never forget a face.
The person I dreamed last night might be somebody i saw on a London street in 1979.Maybe we smiled at each other for a few seconds as we brushed past one another on The Romford Road.The moment was quickly forgotten.But maybe that memory;that image remained....and I used as my template for last night night dream?
It doesn't really matter in itself.But the mind as camera is a nice concept. A belief that nothing is ever lost or deleted..........Nature Wastes Nothing!............ As I say, it's warm:I ramble............

And So (the gentle author wipes sweat off his brow and sips his beer). Sepia Saturday's prompt is "You can choose; or go with armour, helmets, shields, fancy dress, pantomime, theatricals, warlike women or big sticks". .....ok (another sip)
But Sepians,I have a problem here.I need to talk about Margaret Downes .But nobody today knows her.There are no photos or paintings of her (sepia or otherwise).We know nothing about her life.I know more about the Blonde Chick in last night's erotic dream!
All I know about Margaret is that she lived in Manchester until 1819,she died on August 16th that year.She was murdered with a sabre by a (possibly) drunken British soldier.
She was one of 15 murdered that day.(between 400-700 others were injured)
Which doesn't help me find out about Margaret's Life.
She died in what was to become known as "The Peterloo Massacre".60000 working people held a rally in Manchester that day.They wanted to complain about their lives (Poverty:no Vote:etc)This was the biggest even crowd seen in Britain at the time.To placate the authorities ,the organizers asked the crowd beforehand to be peaceful and "Wear Your Sunday Best".
As the speakers on the stage began the speeches..the crowd applauded them and shouted agreement.The soldiers on duty around the crowd (many drunk) mistook the noise for hostility and charged them. Then Margaret died.You can read the detail here
I must take some photos of the St Peter's area (if you know Manchester,it's near the Midland Hotel) The Irony is that many of those killed & injured were themselves  former troops who had fought in The Battle Of Waterloo.War Vets..they had been demobbed:were out of work;in poverty......Hence it became know as "Peterloo".
Shelley wrote the famous Poem The Masque of Anarchy about Peterloo.It contains the words "Ye are many — they are few" which was used by the Recent Occupy Movement.
Which still doesn't get us any closer to Margaret does it........

SATURDAY UPDATE: Today I went to Rawtenstall for a cheeky little Sarspararilla atMr Fitzpatrick's Temperance Bar.It's Britain's last such pub/bar.
I remember, as a kid, they had a Temperance Pub up Haley Hill in Halifax.
Temperance Bars were particularly common in 19th century Northern England.
I must say the brew were very tasty on a warm Lancashire afternoon.I raised a glass to John Wesley .

Sunderland Madge  (Phil the X-Fireman's Mum )who i mentioned last week ,is out of Intensive Care and in an Ordinary Ward.I visit her tomorrow. 'Got her a bottle of 'Mr Fitzpatrick Blood Tonic Cordial'.Lord knows what she will make of that............ wikipedia:history of Temperance Bars
at July 18, 2013 19 comments:

Some Chants from Failed Cultures

The album was gloomy and perverse.the producers had visited diverse groups of indigenes around the world, remarkable only for their persistence in chanting to no avail. Here were the Ketchem of Belize with their muttering eructation 'Fall Out of the Water-Fish'.The I-Arana of Guinea ,disillusioned cargo cultists who moan gently,'Get Me Room Service', and many others too tedious and depressing to mention. ...... My son James didn't help.He'd picked up a couple of the failed chants and as I put him to bed that night he said,in passable Uraic 'Lo!The crops are withering'.Somehow, even among the cartoon stickers and the bright bendy limbs of bendy toys,this didn't sound as incongruous as it perhaps should have. ..........
Will Self~The Quantity Theory of Insanity 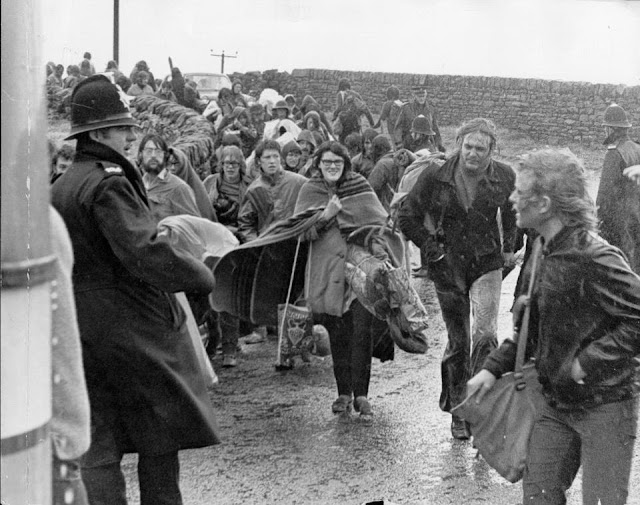 This is Sepia Saturday
Rain isnt "sexy" is it? Sun IS:Floods ARE...but nobody ever wanted to get their camera wet did they?Above is a photo taken on Sunday morning 1970 as Me & the Krumlin survivors left defeated........

Photos From My Hebden Bridge Fashion-Shoot on Thursday, [here] 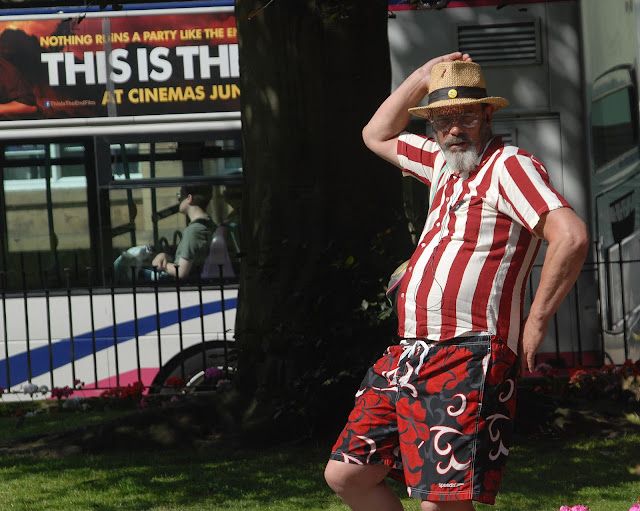 {above.Sunday 14th July 2013:White Eagle Lodge:Rawden,Leeds}
Don't Worry! I haven't "Found Religion"...I went to the White Eagle Lodge in Leeds today supporting someone's healing. I went there 9 years ago.....(that time i just had a cup of Tea then buggered off to Bramley Russian Baths while Cathy went to a Service.This time I stayed.It was good.A long meditation in the middle of the service.A Nice Touch)
I also went to a White Eagle service once in Kensington ,London a few moons ago. It's Christian...with Spiritualism/Buddism /Chakras thrown into the mix:"1930's New Age".Pre-Hippy/Beatnick/World War 2.............
I gather times are hard & they are having to sell the Kensington Lodge.A lovely Building with a cracking & very eclectic library.A Shame,
They are actually nice people .Middle Class & elderley ..The physical Leeds Lodge is in  a beautiful setting,~albeit a former Council Mortuary building   in a (pun) previous life~ A Cheeky Thought did occur to me while I was there.....the building & setting would make a perfect location for a Turkish Bath......Maybe,if I win the Lottery,i could make those Eagles an offer they couldnt refuse?
The Church's Manners are   very low key,yet warm & friendly.......Imagine Jesus had been born in a stable in Surrey instead of Palestine..this is the sort of religion we have here.The whole religion reminds me of something created by William Morris and/or Eric Gill............ White Eagle:wiki
Eric Gill:wiki
Finally.Seriously. I was due to visit The Beautiful Madge from Sunderland in her home yesterday.But just before I arrived ,she had been rushed into Halifax Hospital (again).She is hanging on today,but it is serious.I said several prayers for her today.I hope & your Gods might do the same too?
at July 12, 2013 22 comments:

I dont know how my image for this week's Sepia Saturday. fits the Theme.......It's a group of people.They share a common purpose (unknown).It's not not prescriptive,you can imagine your own narrative around it.I find it hopeful in a strange sense.I also cant help thinking it compliments Mike Garry's words ......................
I dont know anything about the image itself, other than it was taken in 1967.In South Parade Halifax. 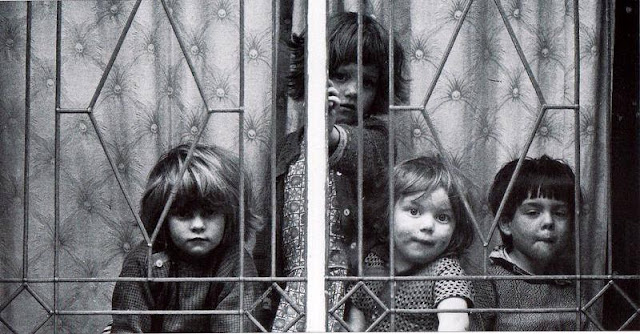 When his Mum died two months ago, Michael Garry's family asked him to write this poem for her funeral .He also read it on stage at The Hebden Bridge Picture House on Sunday 30th June.(which i recorded for you here). Michael is from Fallowfield in Manchester. 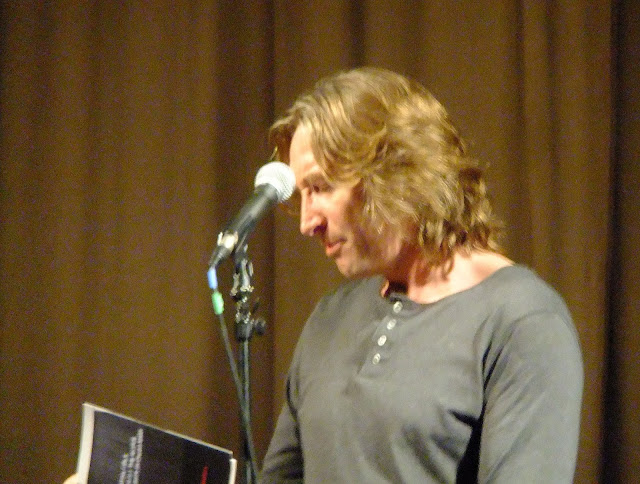 {In The Interest of Balance, here is some beautiful writing to celebrate a Father.}
For some reason (?) on some browsers,this don't play to above audio automatically...if you don't hear it ;here is a direct link for it. you may find Michael's facebook here I have started loading images of the night here although one long video is a pig to download/takes ages...& is not on yet.I also have quite a bit of audio (example above) tho I havnt got around to doing anything with it yet. thanks again to Bob Piper for  your help.I will wrap up an audio cd for you at the end of this week. .John Cooper Clarke was as funny as fuck! A grand night.
+I'm am checking out the http://godisamanc.wordpress.com blog today........