It was my Birthday yesterday.
Me , Cathy & Chris went for a meal at The White Lion in Hebden Bridge.
Afterwards, we caught the train into Manchester's Royal Exchange to see Maxine Peake in The Skriker. Here are some photos i took of the day.
at July 31, 2015

I can't compete with the riders in the other heats 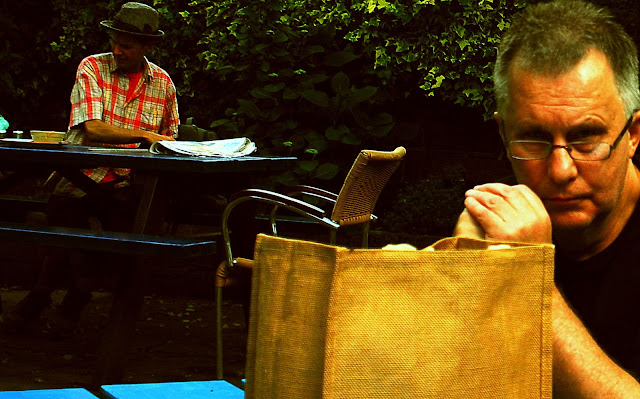 Cath took this photo of me in Hebden Bridge last Sunday. I really dont smile a lot, do I ?
What is that all about ? Bad Teeth ?Slavic personality ? a chronic  lack of humour  & empathy ...?
Its a mystery......

But!this week's sepia saturday   is about "unsmiling faces"  So it kinda fits the bill.Non?


Click [HERE] to see other sepia saturday posts this weekend .....

Fuga Hirundinum (Birds Requiem Suite):DHAFER YOUSSEF ظافر يوسف‎. Jazz à Vienne, Théâtre Antique, Vienne, France; June 29, 2015
Tunisian Dhafer Youssef is a composer, singer and oud player. He developed an interest in jazz at an early age and clandestinely listened to it during his education at a Qur’anic school. He later left Tunisia to start a jazz career and has lived in Europe since 1990, usually in Paris or Vienna
.[ - wikipedia]

https://en.wikipedia.org/wiki/Dhafer_Youssef
Some random photos I took in Hebden Bridge today.
Patti Smith:Live at Glastonbury, Pyramid Stage, Worthy Farm, Pilton, UK; June 28, 2015.
Smith explained that it was the spiritual leader’s 80th birthday on July 6.
“We are grateful to him for all his love of humanity and making people aware of the importance of saving the planet,” she said, before reading a poem she had written for him.
Glastonbury’s Emily Eavis then brought The Dalai Lama onto the stage to huge cheers from the crowd. “I think it would be nice if Glastonbury wished The Dalai Lama a happy birthday,” said Smith, before leading the audience in a rousing rendition of ‘Happy Birthday’.
The Dalai Lama then blew out a single candle on a cake made of fruit, before cutting it.
“Thank you, thank you,” he said. “Dear brothers and sisters, I really appreciate so many people’s expression of warm feeling.”
He then went on to joke about the age of Smith and her band. “These singers and musicians have white hair, but they look very youthful! That gives me encouragement, I should be more like you - more active!”
[click below  to listen}
at July 04, 2015