2014 has not got off to the best of starts for me.hositalized in January with pneumonia,and asthma-breathing difficulties.......
The British NHS is the best health care in the world.(remember,America,my 3 days in hospital:my consultant:my Asthma Nurse:My X-Ray Men;etc are all Free) infact ,even free, we demand 100% 'We pay for it through taxes after all.We have high expectations......
...... 8 days ago I got a phonecall out of the blue from my consultant's secretary.Telling me the X-Rays they took in A&E  on January 3rd showed "A change in the left lung"and could I "undergo a repeat chest x-ray in the second week of February to ensure there is no significant abnormality".The request form i gave to the Hospital's X-Ray Man 7 days ago said on it "LRTI?Left Hilar Prominence" .
Now i was worried.Nobody had sat me down and told me any of this.While in hospital in January two different doctors went out of their way to say my x-rays "were fine".
This Monday I rang up my Consulatant's secretary ( he's called DR.R.P. KARADI by the way).I asked if she had any news of my x-ray results yet.She sounded surprised."Oh ,he's on Annual Leave this week.He wont even look at them for at least 1 to 2 weeks"....
So I have been worried for over a week.self-diagnosing on the internet..researching the joys of Lung Cancer et al(.........while ,no doubt,Dr Karadi reads some thriller on a beach somewhere......)
Thankfully i had a routine visit to my asthma nurse yesterday.I told her the tale.She hacked into the hospital's records & read me the X-Ray Mans report.
It turns out the original x-ray in A&E showed one lung slightly larger than the other,but ,crucially,  no structural abnormalities.The X-Men wondered if i had sat in slightly the wrong position when it was taken.They just wanted a second photo to check.Last week's  2nd X-Ray showed my lungs were symetrical.I was sat wrong orginally......I am ok.
Now my asthma nurse shouldnt really have given me this information.But how long will it be before the Consultant passes this on? (if at all)

When exactly did subjectivity die?
Objectively , they have looked after me wonderfully.But a 30 second informal conversation would have avoided 8 days+ of needless worry for me.
We live in a world of checklists & "targets". It is unfortunate that "hypochondria-prevention"doesnt seem to be a target in this Brave New World.......... 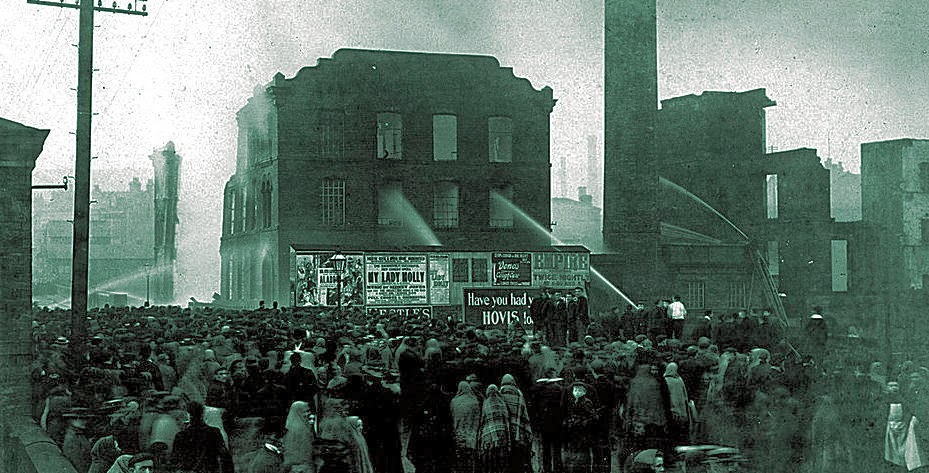 This week's Theme is "Crowds"........If you look at this photo,& the people in it,notice several souls are savvy enough to turn & notice the camera.........
Brighouse,"The Birthplace of The Selfie"?
The building in question was on Mill Royd Street.
A 5-storey high and 17-windows wide silk-spinning mill in Brighouse..
The mill burned down on 26th October 1903, and fireman Alexander Carmichael was killed on his way to the blaze.
Alexander lived at Back Bonegate, Brighouse. He was killed when he was fell from the fire engine as it sped to the fire...............
Poor  old Alex.,killed not by the fire itself, but by the alarm surrounding it....such is life (& death).
at February 14, 2014 24 comments: