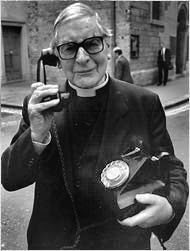 Have you heard of The Samaritans?
Founded in 1953 in The East End Of London.
All major towns & cities in the U.K. have branches.Open for email;visits & telephone calls 24 hours a day 7 days a week.
I was a volunteer in Halifax for 7 years.I also helped regionally & nationally with Training.
Here is a little history behind the organization.
Non - Religious , yet initially founded by a vicar Chad Varah who was moved by the suicide of a 13 year old local girl.She had started
menstruating and, thinking she had a terminal disease ,(with nobody to talk too), she killed herself.
I met Chad a couple of times in his later years.(photo above).His simple idea of befriending filled a lonely gap in British Life.
It's not counseling.You don't talk anybody out of 'topping themself' .You just stand alongside them and (to use that awful American expression ) "Feel Their Pain" with them. Never a Judge. Never a Jury.
Because it is a non-religious outfit.And because it is totally inclusive (after some hard-nosed training *blushes*) , you get a really nice mix of volunteers to work with.
Usually , volunteers will work in pairs.Very easily you might find ,say, a 19 year old big ugly Chav  with tattoos & sweaty armpits sharing a shift with a 70 year old Hyacinth Bucket look alike in twin-set and pearls! Despair comes in all shapes and sizes and so do the friends who witness this despair.
Being a Samaritan is one of the Proudest things I have ever done.
This photo was taken in the late 1970's. A Float in the Halifax Charity Gala.
I would love to tell you that I,m the 3rd person in the tub,under the bubbles.But,That, would be a lie........... 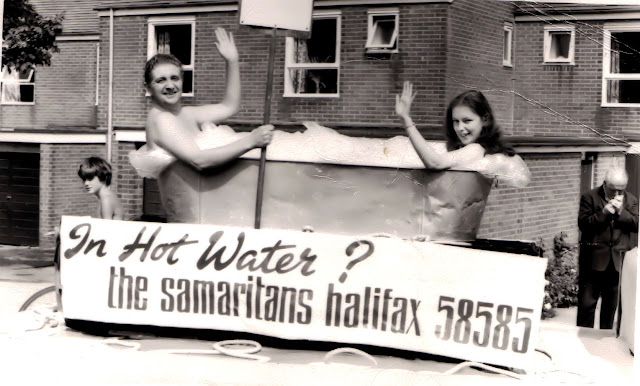 Only while writing this post, I found Here  the  contact details of The Sams in The U.S.A.
[forgive the dreadful pun in the title of this post.Forgive ,also, My posting of Debbie Harry on my (much neglected) Music Blog.]  !
Click here for a cartoon called "Watch out! Stephen Fry has joined the Samaritans!"
+Did you know that Phil Selway ,the drummer with Radiohead, is\was (?) A Samaritan?I also learned via this link that Phil Selway went to the same Teacher Training College  (C.F.Mott,Liverpool) as me!As did Julian Cope.

*Monday update: This terrible story.Politics at it's worse.The Micky Mouse Telephone helpline called "The National Bullying Helpline".Is causing a minor storm here in pre-election Britain.They claim that government staff rang their helpline claiming our Prime Minister bullies them.........which may be true\it may not.However,they broke all the rules of caller-confidentiality.As always with Politics.Dont ask "WHY" ask "WHY NOW"*
at February 19, 2010 39 comments: