the British monarch is descended from the Prophet Muhammad 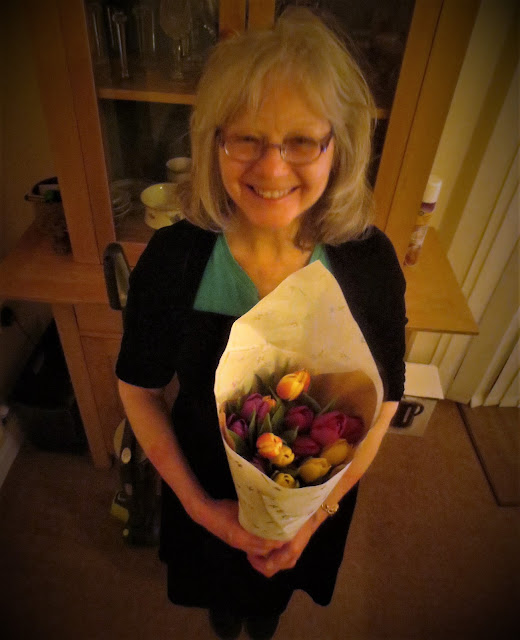 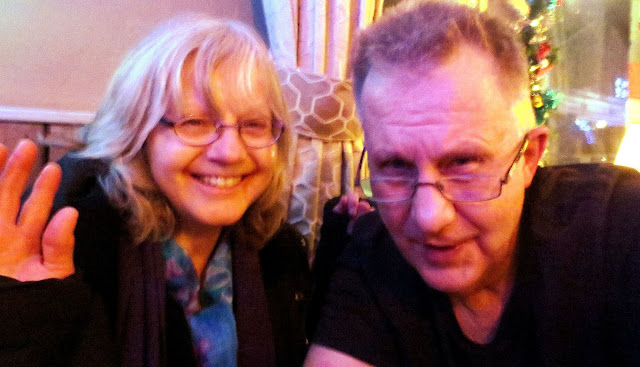 "QUEEN ELIZABETH must claim her right to rule Muslims.”
So ran a recent headline on the Arab Atheist Network, a web forum.
It was only partly in jest. According to reports from Casablanca to Karachi, the British monarch is descended from the Prophet Muhammad, making her a cousin of the kings of Morocco and Jordan, not to mention of Ayatollah Ali Khamenei, Iran’s Supreme Leader.

The claim, first made many years ago, is gathering renewed interest in the Middle East. Why is not clear, but in March a Moroccan newspaper called Al-Ousboue traced the queen’s lineage back 43 generations. Her bloodline runs through the Earl of Cambridge, in the 14th century, across medieval Muslim Spain, to Fatima, the Prophet’s daughter.

the sounds a bit tinny on my video here.But the picture is ok.A Lovely venue (full-house,1,500 souls)
https://en.wikipedia.org/wiki/The_Ritz_(Manchester)
https://zimnoch.smugmug.com/Young-Fathers-23-rd-March-2018Manchester-Ritz/  a Shout Out to Halifax couple Maciek & Anna Platek who me & Cath met up with in Manchester at this gig.
at March 24, 2018 No comments:

Nothing much new to show this week.
It been fucking boring.

The most exciting thing to happen these past days has been my  trip up to " Stinky Hole " to draw some fresh sulphur spring water for my eczema.
I'm not even convinced it does any good.
But at least the smell takes my mind off scratching. .................
Hopefully my next posts will be more interesting.
Friday/Saturday me and Cath go see Young Fathers at The Manchester Ritz.
The following Thursday ,about ten of us from the various Halifax/Rochdale & Bacup Tribes meet up in Manchester's Chinatown for a curry ( a rearranged date, due to snowfall on March 1st)
Yesterday I was chatting to the Estate Agent we are renting our current flat/apartment from.

He told me that the former tennant here was a 70 year widower.An ex-Labour Councillor and Model Railway Enthusiast
He lived alone  and used to run a railway track throughout the 2-bedroom/2 bathroom flat.
I'm am still trying to 'process' this information....
I dont know what to make of it?
I cant help thinking it would have totally fucked - up the Feng Shui.......?
at March 20, 2018 2 comments: 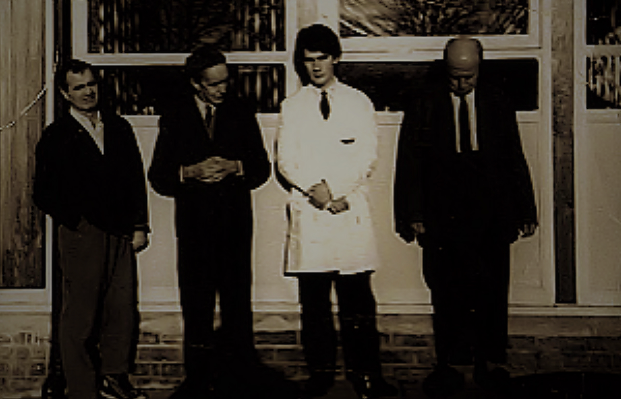 ......which  all started so well for me!
having  grown my hair: got meself all the 'right'clothes:had watched "Easy Rider" a couple of times:and was in the middle of my first Herman Hesse novel.
So I felt like a
Debutant,entering 'Society'  for the first time.
The first thing that happened to me was a young 'hippy'with a London accent walk up to me   to ask
"Where are the toilets ,Man"?
I had arrived.I  had been recognised as one of the tribe........ 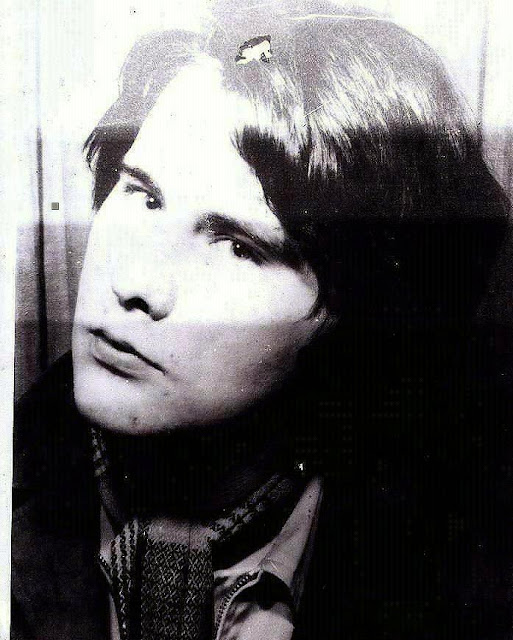 "When the Humblebums appeared on Saturday evening it started to rain even harder and because the stage roof was flat , water quickly collected and poured through onto the musicians . During the course of their performance the drummer played with an umbrella up and there were constant interruptions due to workmen coming on stage to drill holes in the floor to let the rain out. ..." 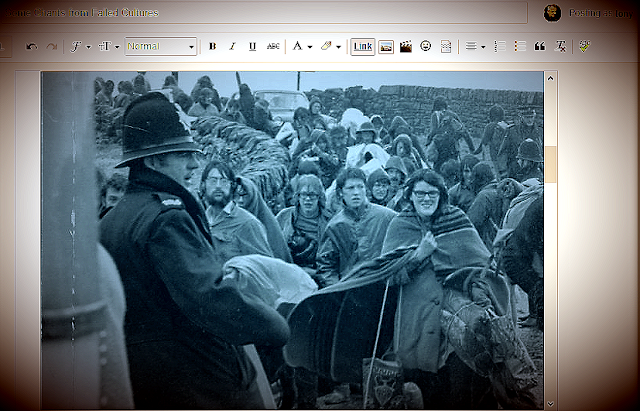 The above photo is from 1970.In Barkisland ,near Halifax.It is during the  Krumlin Festival
It was billed to be "England's Woodstock" .
A bonkers Idea!  High up in moorland...A torrential storm......Horrible Weather.By the second  night ,the police were handing  out waterproof -sheeting to us baby hippies.......One band ( John Mayall?) had to abandon their set for fear of being electricuted.
One person died overnight from exposure...
Krumlin was abandoned halfway through this 2 day  storm.
Between making drug -arrests,the police helped us evacuate.....

The promoter , a  Local   Halifax Lad   called  Brian Highley
vanished alone on foot into the stormy misty moorland.He was
.".....owing large sums of money to all and sundry or to have wandered off in a fugue-like state , tramping the moors for several days before being rescued in the nick of time before he expired from exposure and dehydration......."
It wasnt all bad though!
For example,it was  the first time I heard & saw live rock music (other than seeing The Troggs a few years earlier at Halifax's Victoria Theatre)
On Krumlin's   first night (before this freak weather came ) I heard Sandy Denny sing :England's finest ever folk voice......It was worth it ,for me,for this alone.
The Pentangle played live too !
.And a young Elton John made his 'big audience' debut ( handing out bottles of brandy to some in the crowd to keep them warm)
Brian Highley   later went on to invent 'Trivial Persuits ' and script write on British t.v.'s 'Spitting Image'. 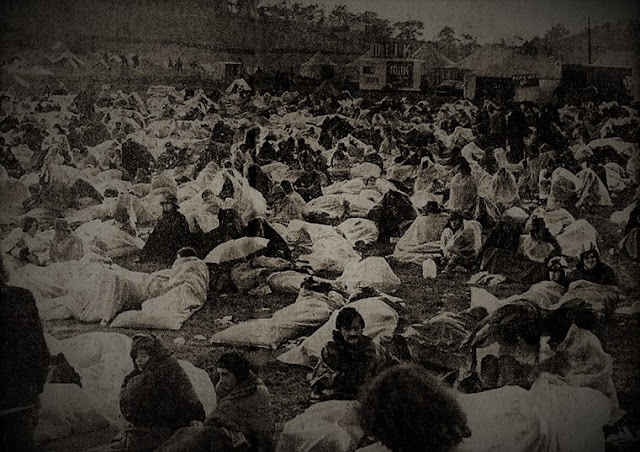 is this what your missing ,the diamonds and the gold?

You may need to write this down/ copy&paste/feedburn/whip out your crayons/ etc
...... and tell people?
Exactly 3 years ago, me & Cathy saw Young Fathers play live in Rochdale.
here: are my images + videos from that night.
We go see them again at the end of this month in Manchester.
They have a new album out this week.
This is the Guardian Review
You may download "Coca Butter" here:

above.....a quote by someone on facebook this week about Scott & Varley 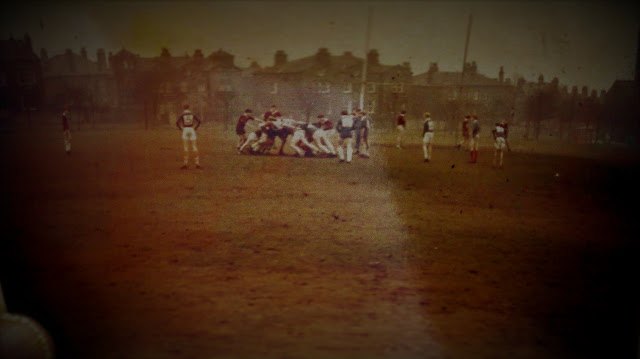 Continuing on from my sepia saturday post last week here is a photo i found today (not even scanned:see my thumb!)
I'm kind of "there"in the photo.But you cant really see me.Maybe an ankle/leg?This is perhaps a reason I have never bothered before with this photo.
I'm in blue.With my back to camera .In the middle of the "scrum".[you will just have to take my word for this!]
Still .It meets a critera for this week's theme of "Sports Fields".

My photo must have been taken in 1966. I played for Clare Hall School, Halifax. We were unbeaten that season.I played in every game as "hooker".[The bloke in the middle of the scrum who has to win/gain the ball for his team]
. The game you see in this photo is being played on Savile Park (aka "The Moor"}.I think it is  Haugh Shaw School we were playing that day.
I seem to remember I got my nose bloodied that day.Sadly I have no photographic record of the exact moment  i lost my good  looks.......... Less than a couple of miles from where this photo was taken in 1966 was Scott & Varey 's Antique Shop on Prescott Street in Halifax.
Antique Shops were an usual thing in 60's Halifax.(everybody then wanted "new").
The shop had opened in the early 1960's .For  a hundred years before ( built in 1862.)It had been the town's  Co-Op/Industrial Society shop.
Scott & Varley's stopped trading  in the early 1970s.
It had been owned by 2 brothers.
One died.The other remained,living above the shop but keeping  the shop below shut.
The strange thing is ,the window display & items for sale have remained unchanged for over 40 years.
The doors are always locked.Nobody asnswers if you knock.
Sometimes,at night, you can see a light on in the back of the shop. Shades of the Twilight Zone!
Its one of those things that if something remains the same for long enough ,you forget about it!
It was only from me reading a facebook discussion this week, that i remembered about its existence .
I  took these photos yesterday
. Incidently.I attended Clare Hall School  between1963&1967 and is only half a mile from Scott& Varleys.
Which means they are displaying the exact same items today, as they did when i was a pupil
it's nice to know some things dont change!
https://zimnoch.smugmug.com/Scott-Varley-Halifax/
I had some nice news today .
The date has been fixed for the 50 th Aniversary of the opening of Carter Lane Youth Hostel in London.
Carter Lane is the old Choirboys School opposite St Pauls in The City of London.
https://www.yha.org.uk/media/blog/hostel-week-archive-london-st-pauls
I left school in 1968. I then worked as a nurse in a mental hospital in Todmorden (Stansfield View) In early 1971 I jacked that job in and moved to work at Carter Lane.
I had a ball! Sex Drugs & Rock N Roll!
I have posted here previously: about some of my adventures!
So.The weekend of 25 th July I plan to attend that weekend reunion!
We get to look around the building ,then tour the local old pubs inThe City.(a couple are mentioned in Dickens).Meet up with some people I used to work with then( & have kept in touch with since)
(Nine years later I returned to London as a teacher in the East End )
a feast of nostalgia awaits! 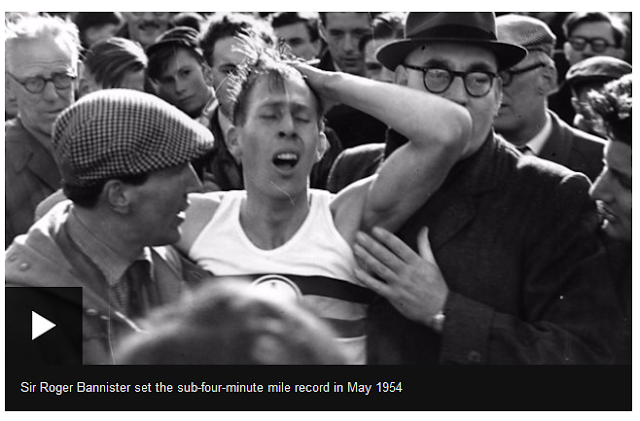 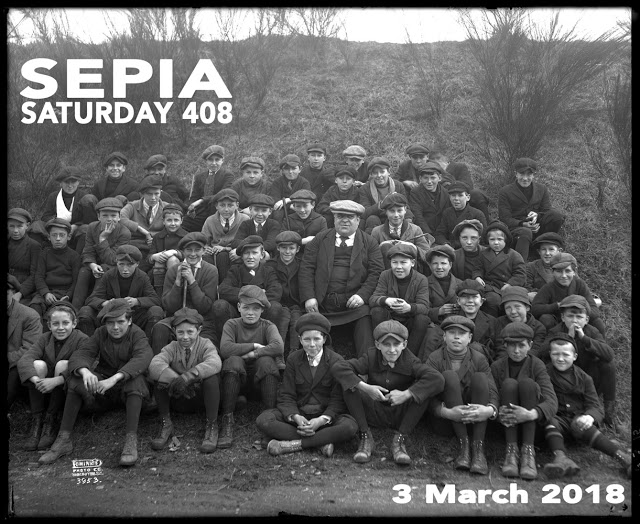 This week's sepia saturday holds the theme of "groups". 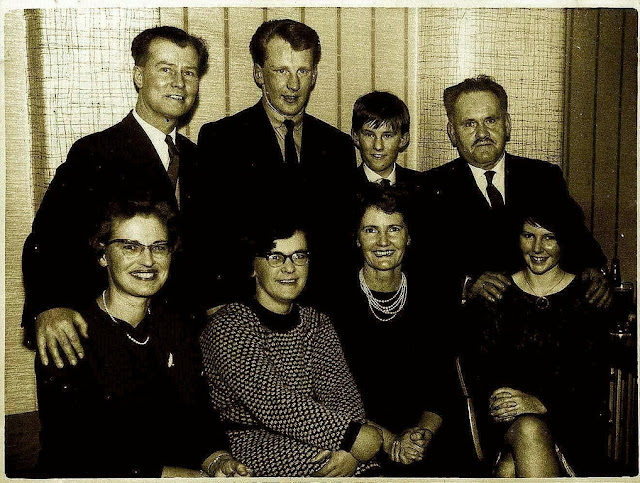 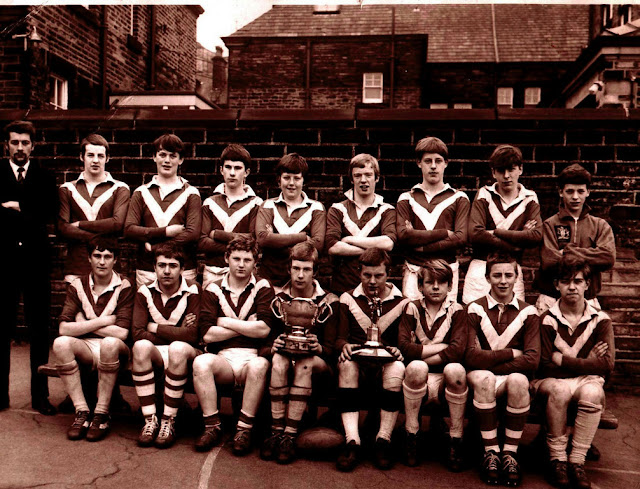 1967:
Huddersfield   Road,Halifax.
(photo by Halifax Courier)
Clare Hall School Rugby League team.1966/67 season.
That's me 4th left/back row .I dont think it looks much like me ? Behind the cameraman were members of the girls hockey team .I think I was attempting to appear hard  ! 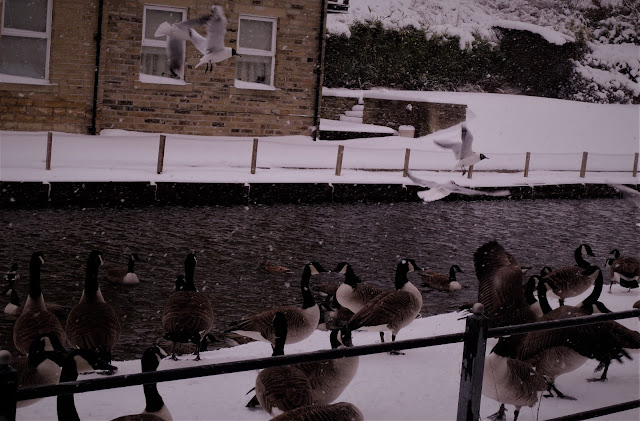 As I create this post  I listen to this .At the end of March me & Cathy have Tickets for Young Fathers! 'lovely Band!
Finally i found  here:  a mystery photo..............just because everybody is looking at you...doesnt mean your paranoid. 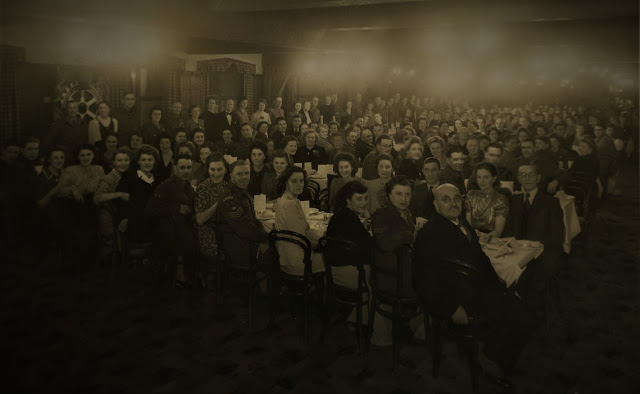