[Switch on audio to hear John's Talk]
"There is a story that a Halifax market-woman was riding her horse past the Gibbet as the axe fell and the severed head bounced across the platform and into her lap, where it seized her apron in its teeth and refused to let go....... "[from:]

Picture the scene........Stood sheltering from the heavy rain against the blackened walls of Halifax Minster last Sunday afternoon.
20 or so Souls taking part in one of the Calderdale Heritage Walks.
We listen to John Billingsley tell us the origins & meaning of the name "Halifax".
You can also read about Halifax's Grizzly History here Haunts of the Halifax Slasher A walk through hysteria and violence in a Pennine milltown 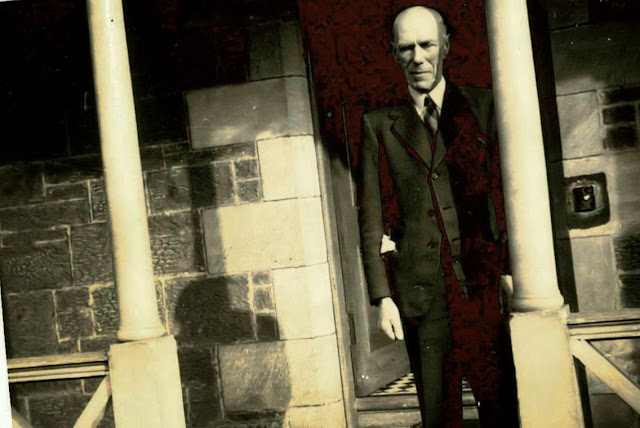 One of the cues/prompts for this week is to 'celebrate our ancestral homes ' Hence this  audio of John's voice.
The photo here is of an unknown member of the Scottish branch of my family in Perth.(taken ,presumably outside his house?) .He looks like a hermit,non?
My Family tree has many branches of Half-members.
In the 1960s .I remember Me & my Mum visiting one relative, obscure & reclusive in Perth.
We knocked and we knocked but therelative I never saw  didnt  answer the door.....I think the house in the photo was where we waited & eventually (sadly) walked away........
Now.This photo is much older.(1920's?) But I feel a connection with my own  memory and with the hermit of Hælɨ  fæks.......... .
This is a sepia saturday post.
at October 31, 2013 26 comments:

Everybody had to pay and pay

On Sunday.Me & Cathy went on a splendidly wet & breezy Guided Walk around Halifax with local historian & writer John Billingsley.
Check out my next post for an audio of him explaining how Halifax came to get its name.Part history:part folklore & part magic...I think you might find it both interesting & surprising.
Also,John told many tales of Halifax I didnt know.eg that the last two people to be executed in Halifax were two of "TheCragg Vale Coiners".
Once dead   ,there bodies were put on display on Beacon Hill (high overlooking the town)As a warning to others.[A bit like Calvery.......]
Even more macarbe, their corpses were held erect within iron cages.The cages were specially adapted so that one arm was elevated (in Nazi Salute-fashion)So that they appeared to be seen pointing out  the part of the town their supposed "crimes" had been committed.......
We returned from our "Ghost Walk" to hear the News of Lou Reeds death.  walk on the wild side indeed! Rossendale Council close Haslingdon Baths in 10 days (like FOREVER)
I thought today,Friday, would be somber....But all the staff got themselves dressed up in pink St Pepper uniforms to raise funders for breast cancer awareness. A jolly good idea....
.I thought it would be a really sad day .Another public facility closed by Tory Cuts.
But,to be honest the saddest thing for me was, as we arrived in the building ,we saw about 6 young council staff sat in their pink cancer-awareness uniforms & I said something like "Oh,you look like Sgt. Pepper's Lonely Hearts Club Band ...!" And,in unison they said "Who's Sgt.Pepper?"...I felt very old............

This being human is a guest house.
Every morning a new arrival. A joy, a depression, a meanness, some momentary awareness comes as an unexpected visitor.
Welcome and entertain them all!
Even if they are a crowd of sorrows, who violently sweep your house empty of its furniture, still, treat each guest honorably.
He may be clearing you out for some new delight.
The dark thought, the shame, the malice.
meet them at the door laughing and invite them in.
{RUMI}

"Hey, let's put on a show! The desire to dress up, lark around in public, utter words that you would not normally recognise, is as old as the hills - or at least as old as a string of Judy Garland films. Sepia Saturday 199 celebrates the theatre, be it professional or amateur, serious or comic, situated below a proscenium arch or behind a kitchen table. Dressing up, dressing down, acting daft or acting dreadfully - they all form part of the script for Sepia Saturday.............."
But do we have a choice in our costumes? All The World's A Stage and we spend our lives trying to work out who the Director is......p.s. & where is S/he?

This is slideshow of stills mainly taken from 2 films. A Pace Egg Play in Hebden Bridge :1961
And The Halifax Gala:1960 plus a few other photos from Halifax's past I threw into the mix.......A bit of a hodgepodge of styles & timeperiods.But they were all taken in Hebden Bridge & Halifax.They all are (i think) about performance;forgetting oneself & being caught unexpecting.The all also challenge how we are suposed to remember Them Olden Days......
This is a sepia saturday post
REFERENCE:Pace Egg Plays
Funny really.I always associate Buddy Holly's voice with memories of 1960's Halifax.
If I were to close my eyes while listening to this song my mind would conjure up a picture of old Haley Hill (the road up to Boothtown)
Stood in Evan's Record Shop.All dusty & dark.
(They knocked it down in the 1970's to build a Bleeding  Flyover .....).
at October 18, 2013 17 comments:

'I left a note on the kitchen table saying: I will not be home at 5pm. You will know why.'~Anne Scargill. 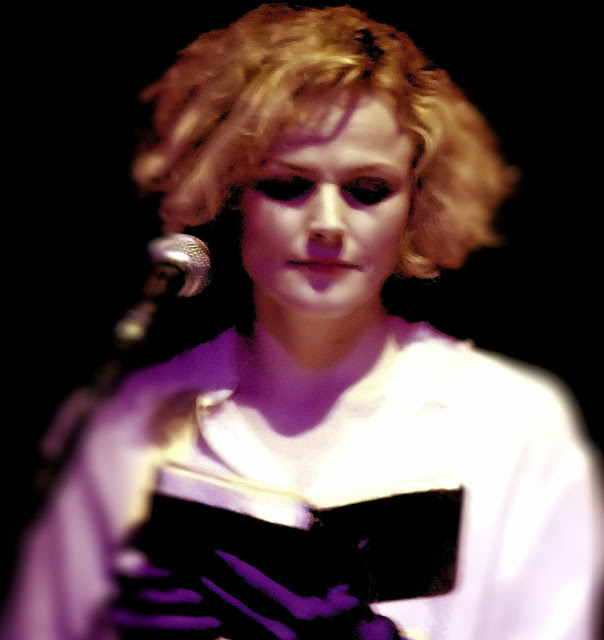 Me & Comrade Mrs Gentle Author went to The Hebden Bridge Trades Club for a fund raiser for The Morning Star Newspaper.
Throughout the night,the ghost of Halifax's most famous Marxist & novelist Ralph Winston Fox  danced on my shoulder.......
We went to see the actress Maxine Peake and Anne Scargill
Also appearing wereThe Eccentronic Research Council,   Red Hippo, with their remarkable Celtic musical interpretations, and poet Graham Alexander, fresh from his success at the Edinburgh Fringe.

You may notice a young bloke in one of the photos? He came to announce that   our new Peoples Assembly holds a meeting in Hebden Bridge Next Wednesday[23rd October}.Details {here}.
Expect reports next week.....

You can read more about The Peoples Assembly here
Coming soon on Radio 4 Maxine Peake plays Anne Scargill in Queen of The Coalfields
at October 17, 2013 4 comments:

"All that is solid melts into air, all that is holy is profaned, and man is at last compelled to face with sober senses his real conditions of life......"KARL MARX


Me & Mrs Gentle Author  went to Manchester today to see the new exhibition at it's Art Gallery called "All That Is Solid Melts Into The Air" {details}
Its on until early January.Try go see,its rather good!
Afterwards, me & "Mrs" went to watch the opening of The Manchester Dashehra Diwali Mela outside The Town Hall.

Me & Cathy go see Maxine Peake at The Hebden Bridge Trades Club on Wednesday .A fund- raiser for "The Morning Star".Details of her band [here]
Elizabeth Southern was one of The Pendle Witches
The voice of the actress Maxine Peake singing with a band she's in (something of a side-project).I hope to put here visuals& audio from her gig in Hebden Bridge on Wednesday night.
at October 12, 2013 5 comments:

death is a lousy disappearing act

My Son Chris is 25 today. I love the bloke. He's doing really well. Busy building walls .Making Paths.Doing Horticulture. Chopping down trees.He's had some trouble this year.But thanks to HIS strength & the help of  Calderdale NHS (that's even better than Obamacare my American friends!),My Son has grown so strong again .
Meanwhile, Ive not been well for 7 days.(just flu & stuff).& .I sat and watched David Cameron today on the tv
.Irony :(today of all day's) he announced that ,if elected again,he would take away all support for those under 25.Its just so fucking cruel.(READ details  )

(I know I have lots of American readers.I would like to say ,you must be puddled if you don't support Obamacare.)

His act does not improve with age  Observe the shabby hat and gloves.... The tired act that no-one loves..... There was a time he produced doves
A mirror and a puff of smoke His mysteries are now a joke
His poor assistant black and blue She's tired of being sawn in two
Hidden trapdoor, velvet cape Still from death there's no escape ......Words of sympathy and tact.... Only underline the fact Death is a lousy disappearing act
Lord have mercy and be kind When our faculties unwind
Overlook the hat and gloves The tired act that no-one loves There was a time we produced doves
The old magician takes the stage With sleight of hand he’ll disengage
As dignified as you’ll allow He’ll take his last, his final bow He’s lost all his illusions now .......
He’ll take one last, one final bow
This weekend each year i go the Rugby League Grand Final at Old Trafford in Salford.We meet beforehand at The Halfway House Pub in Royton.(not going this year due to sickness) I was out drinking with friends in Manchester the other week.My friend Jim Stridgen was telling me something i never knew concerning The Peterloo Massacre in Manchester.
He told me that the woods behind The Halfway House,at Tandle Hill were manmade in the 19th century.Orginally open  land ,local people would assemble there to protest ,talk & plan against the authority of the time.
After Peterloo,fearing further protest,the authorities cunningly planted lots of trees there to make marching & grouping more difficult.

A way of blurring the view? Of altering the landscape to  prevent folk seeing clearly ?It depends on your point of view i suppose.
This week's sepia Theme is around blurred & unclear photos.Here are 3 of mine.The 2nd a fairly recently one ( 2005) on Boston Common.Me Chris & Ayse had walked in it and a sweet lady offered to take a photo of us together.It was February.Tons of snow on the ground.The sun was both blinding & low.Lord knows how she managed it ,but the snow&sun seemed to leech all the detail out of the image.I still like it..albeit in an abstract kinda way.
The 3rd photo is a rare one of me & my Dad .It must have been taken 72-73.I must have been 21 years old at the time....'back from my year away working in a London Youth Hostel.While in London my weight had shot up to 15 stone.I was on a diet (eventually i lost nearly 5 stone!) but i look poorly in the picture.Over 9 months i studied and gained 6 o levels & 2 A levels (i had no qualifications at the time)I passed & later in the  year entered Teacher Training in Liverpool.
But the combination of book-learning & lack of food can be seen in this shot.Its blurred but it still evokes a lot of memory for me. 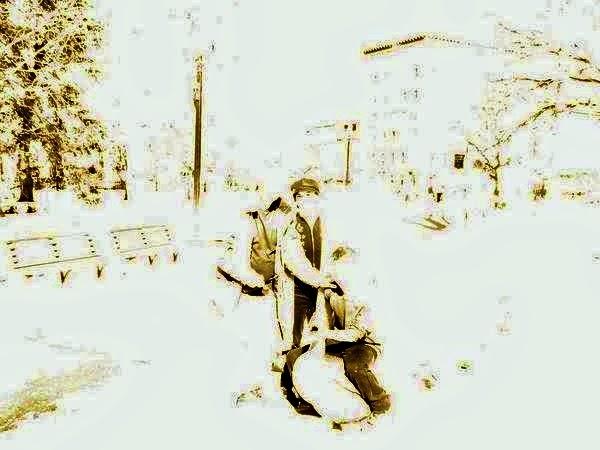 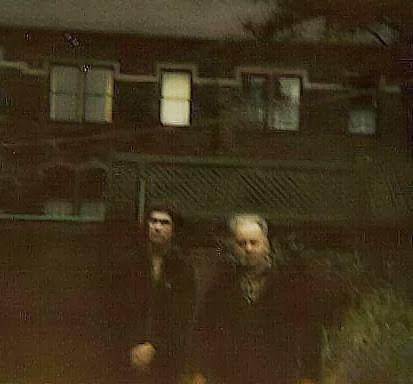