we came to the pyramids all embedded in ice 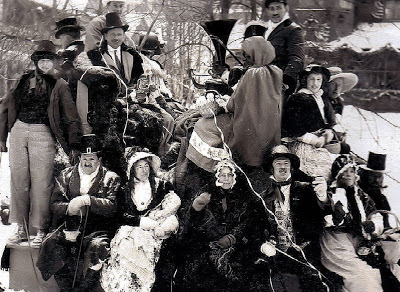 This is a Sepia Saturday  post.
I may have mentioned it before...the fact that my Aunty Brenda was born in Canada. My Grandfather( with his 2nd wife/ my grandmother would later become #3!)  moved there in the early 1900's "looking for gold" :"gold panning" Whatever........I will give you more detail when i understand this more myself........{ I have a postcard from Canada as evidence}. Later my Grandfather must have moved South, hence these photos from Saranac Lake in upstate New York. shown here are 3 of photos my family took at the Winter Carnival there.

The rest you can see in . 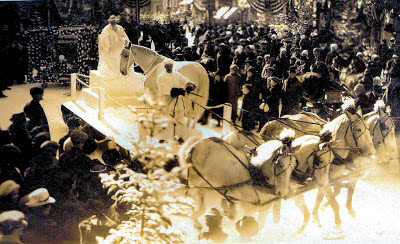 My Polish surname is derived ,I believe, from the word "zimny" meaning Cold,standoffish,bleak,stiff......you get the Drift? Not a lot of 'personal stuff' (AKA "Real") on here at the moment.Winter is a dreamtime,non? I always dream in a more vivid fashion in winter.......no doubt my hiberation will end eventually!

***
In late January 2003 Me & Cathy went to see The Flaming Lips at The Academy in Manchester.On the Bill,supporting them,was an unknown (to me) band called British Sea Power.I dunno...for whatever reason I took a shine to those young lads.I have seen them several times since & championed  them here on this blog.A really unusual combo.
Live they are raw&loud.On recordings they are a melody...they are all over the place.Maybe that's the reason I like them...?
Their hobbies (when not reeling&arocking) are Bird -Watching (the  Ornithological kind not the Jimmy Savile kind!) & the poems of John Betjeman! .Turns out they are closet Sepians too! Witness their most recent promotional video! Marvel at all these sepian images!How cool is that Guys&Girls,now then now then..... (jingle-jangle)...
A body is found in the frozen North Dakota woods. The cops say the dead Japanese woman was looking for the $1m she saw buried in the film Fargo. But the story didn't end there.....{read}
at February 07, 2013 33 comments: