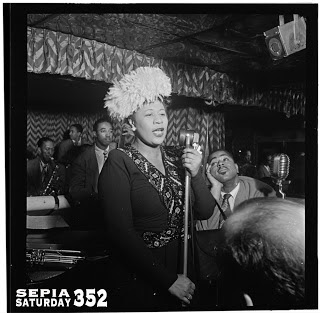 Our man Dizzy , in the prompt photo for this week's sepia saturday ,seems to be in dreamland.
Which reminded me of  this story of Commandant Darget.The man who photographed dreams.

http://bigozine2.com/roio/?p=1857
The Internet Archive also holds several of Ella's live concerts {here}
They are copyright free.You can listen/download them there at your leisure.

the mysterious dancing epidemic of 1518.

Reading this today reminded me not a little of Trump,s Inauguration.

“...............they suggest that hunger and psychological stress were the likely culprit, with a healthy dose of religious belief thrown in: “In times of acute hardship, with physical and mental distress leaving people more than usually suggestible, a fear of St Vitus could rapidly take hold. All it then took was for one or a few emotionally frail people, believing themselves to have been cursed by St.Vitus, to slip into a trance. …..........”

caught by the river 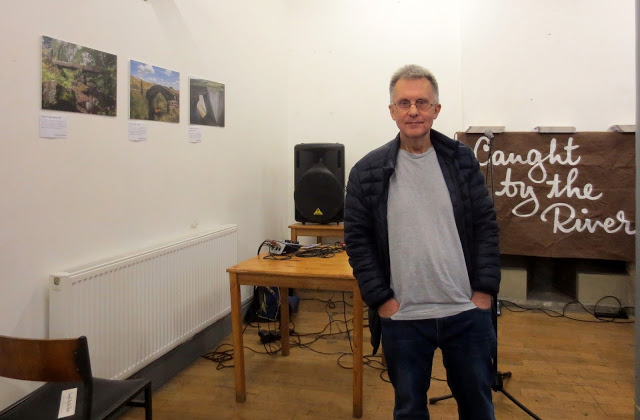 Me & Cath went this afternoon to Caught By The River
at   Machpelan Mill in Hebden Bridge .
An  afternoon of poetry   &    short stories.
Splendid .......
......although odd at times.They were  holding a "Laughter   Workshop" in another part of the mill.
It seeped through occasionally.
Shakespeare competing with a stranger trying to smother Les Dawson with a duvet!
Only in Hebden Bridge........
A special mention for  Zaffar Kunial
His poetry was top ~notch.
The afternoon's photos (+short video) are here
at January 21, 2017 2 comments:

the day that winnie came to town

Happy New Year Sepians! This is my first post of 2017
See other posts
here. 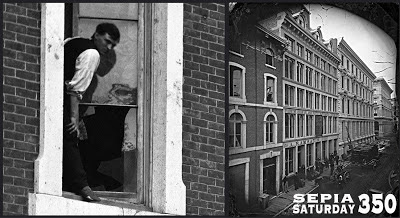 I was sat in the sauna at Halifax swimming pool last Tuesday morning.
We got talking about Polish Immigrants to England.
I told them how my dad was Polish.
How ,during WW2 he was based in Scotland.How he was in the Parachute Regiment  of the Free Polish Air Force.How he flew with the RAF in Battle_of_Arnhem.....
About how he defeated Hitler practically single handed !
(Incidently ,my Uncle Gordon was a pilot in the RAF .He was shot down ,and spent 3 years in a fascist prisoner-of-war camp .So it goes.......)
I said how my   Dad  was demobbed but  couldnt return to Poland because he had abandoned  the Soviet Russian army at the begining of the  war and ,because of this ,was technically classed as a "deserter".So it goes......
In 1945 he & my Scottish mum & brother Zyg first stayed in a resettlement hostel near  "the moor" in Halifax in the building that is now the club for The Halifax Old Crossleyians

I told the blokes in the sauna this because I get fed up of hearing anti-Polish predudice & UKIP lies.To me, Nigel   Farage is  just another  Oswald_Mosley

( children! learn  your history...)
An old bloke in the sauna  box started telling me his story .He had been a  16 year old lad in 1945.
One day ,during that year's  general election campaign ,Winston Churchill came to speak.
Thousands turned  out.They packed the bottom  of Hanson  Lane, right into Georges Square. 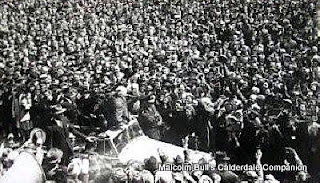 At the time , the Bull pub was being constructed.
Exposed steel scaffolding was  all over the shop.
The chap in the sauna was stood right near where Churchill spoke.He could see him   clearly.
During Churchill's speech ,a bloke with only one leg ( a vet fromWW1 ?) moved gingerly along a high scaffold bar and took a seat  halfway along it.
One leg dangling.
They all began to  listen to the  great war leader & prime minister wannabe 's   speech.
Halfway through Winnies talk ,the Vet shouted .

"Mr Churchill.Tell them about Gallipoli"
Churchill ignored him and continued.
Then a  second time,louder ,the ex-solider cried

"Mr Churchill .Tell them about Gallipoli "
Churchill  ignored  him   again .
A third time the man cried out.
But ,this time, Churchill turned and  whispered something to an aide stood next to him.
A few moments later two policeman inched across the scaffold .Somehow they removed  the man away....
He was taken   to Harrison Road Police Station to recieve some  sort of Caution.
So it goes....... 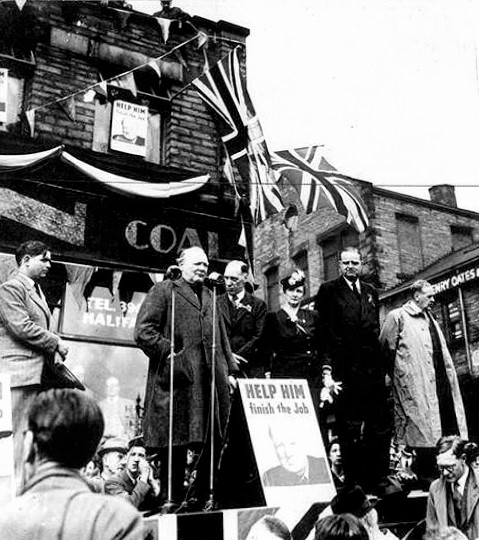 Read more about Churchill's failure at Gallipoli here :
http://www.history.com/news/winston-churchills-world-war-disaster
For more background of Churchill's visit to The Calder Valley in 1945   you can read this report fromThe Halifax Courier:
http://www.halifaxcourier.co.uk/news/day-winnie-came-to-town-1-1897717
My thanks to Malcolm   Bull's Calderdale Companion for  two photos and  this    extra  text
http://freepages.history.rootsweb.ancestry.com/~calderdalecompanion/m_4.html 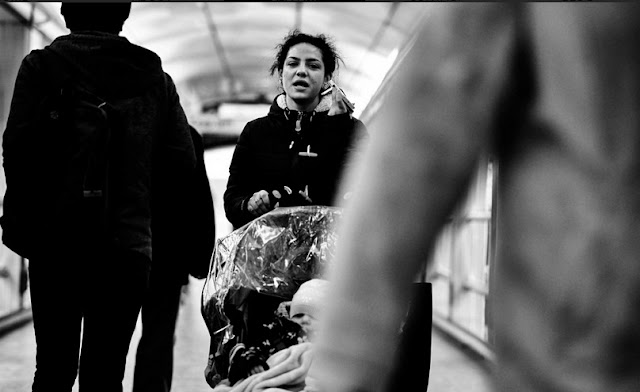 Me & Cathy went to Dean Clough  in Halifax this afternoon. Several exhibitions are on.http://www.deanclough.com/arts/whats_on.asp
I was  especially taken  by The Human Forest !
Street Photos by Adam Summerscales.Shot in Sheffield.
As well as being technically great.and having  arresting compositions, I loved how the people in the photos are (mostly ) unaware & uninterested .
They were getting on with their lives........reminding me of what street photography was like before digital  and CCTV arrived.
.These days we  sense & expect surveillance.We strike a pose whenever a camera pops up.Ironically , the more we are photographed, the less we show of ourselves.
Somehow .Adam's photos catch people unaware and natural. Maybe its the  angle he shoots? Maybe people see only his  mobility scooter ?
you can visit Adam's website  [here]
and learn more about him   & his   work and  see  the pictures. 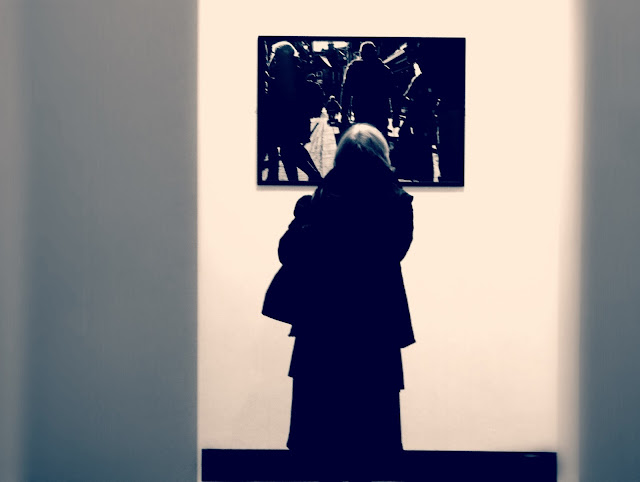 I took this photo on boxing Day outside the Co-Op in Mytholmroyd. Me& Cathy were driving into Halifax. She pointed the image out to me.

......The bird was glancing nervously in their direction , freezing still and then hopping , poking and probing in the rocks for food and glancing back intensely ,fearful and yet free. As they moved closer , it hopped out into the flat , hard sand, dragging one of its wings.
It's injured , Meg whispered.
It's an act .They do it to lure predators away from the nest. He took another step toward the bird and it skittered up the sand ,keening loudly , dragging its wing.
Let me try to explain.Living things , all of them , are tied together. A bird is roped in tension,it's beautiful to watch. It's part of what makes a bird beautiful , he said. She'll fake it until it's a reality if she has to, luring the predator away , at the risk of her own demise.Once it gets near enough she'll keep playing and playing until it's close in and then she'll try and scare it . That's about ninety percent of what you need in the natural world; the one with a bigger bark , a display of power, wins.
DAVID MEANS: HYSTOPIA
https://www.theguardian.com/books/2016/may/21/hystopia-david-means-review
Me & Cath will be attending this fine event on Saturday 21st January in the afternoon 1-4 by The River Calder . [Link:Details] It would be nice if you joined us. 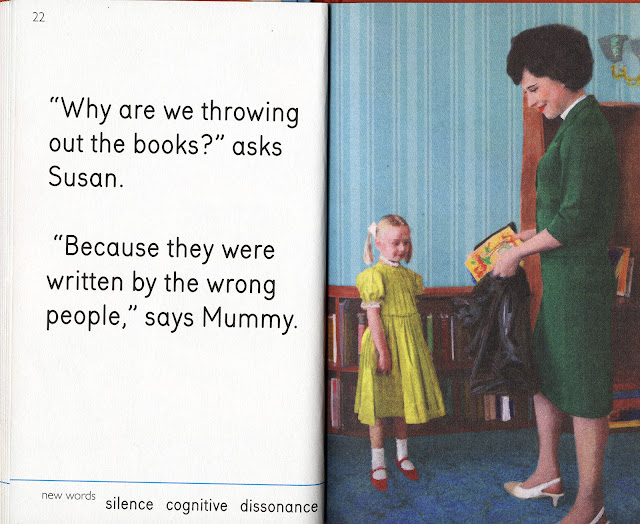 you could do it with your eyes shut .don't you see ? 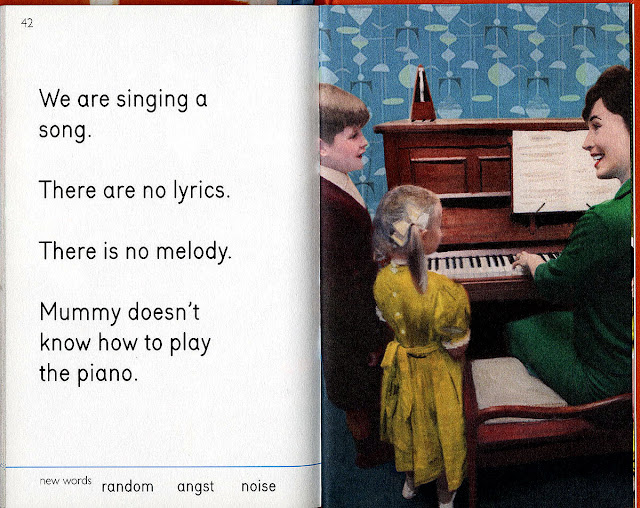