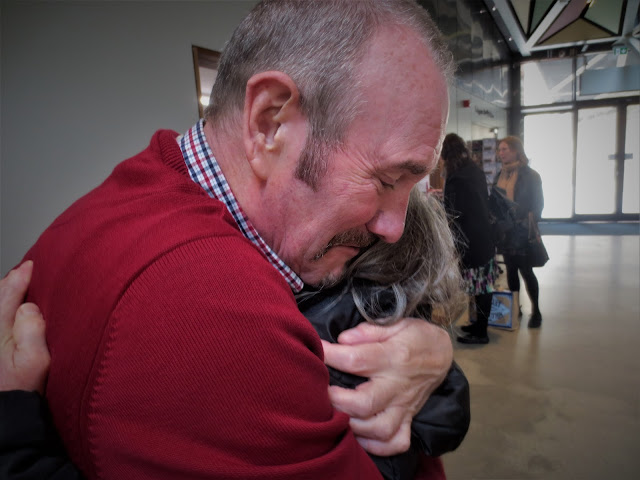 A lovely day in Manchester today with my brother Zyg: sister-in-Law Jean: & her sister Mary.
A grand Spanish meal at Evuna on Deansgate.
We also attended a Lunchtime Concert at Chetham's School of Music 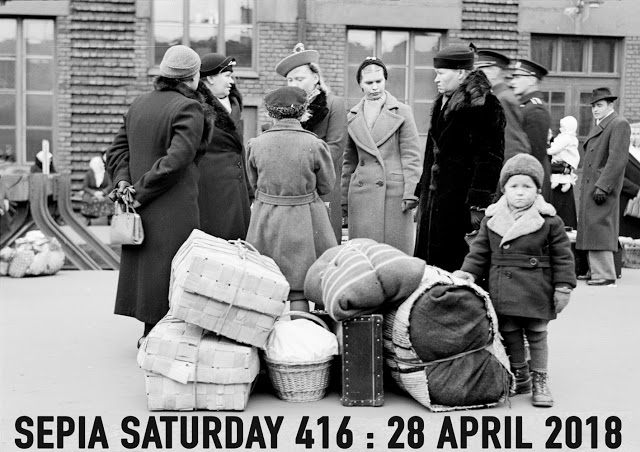 One figure jumped straight out at me from this week's sepia saturday prompt photo. the elderly lady above (in black )looks very much like my great-grandmother from Perth in Scotland
I never knew what she looked like until I found an old 4 inch X 4 inch negative among my Mum's effects after she died in September 4 th 2008. I developed that negative. It was rather disturbed by it at the time. 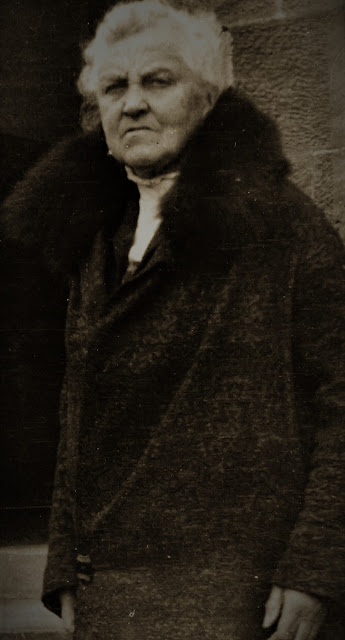 Now I know that genetics pass on similar physical features. But this was more , this lady looks identical to my Mum (albeit , a rather austere version).
The woman in black in the prompt-photo isn't identical in the same way...but certainly near enough to comment on ..................
San Francisco; November 16, 1980
at April 26, 2018 8 comments: 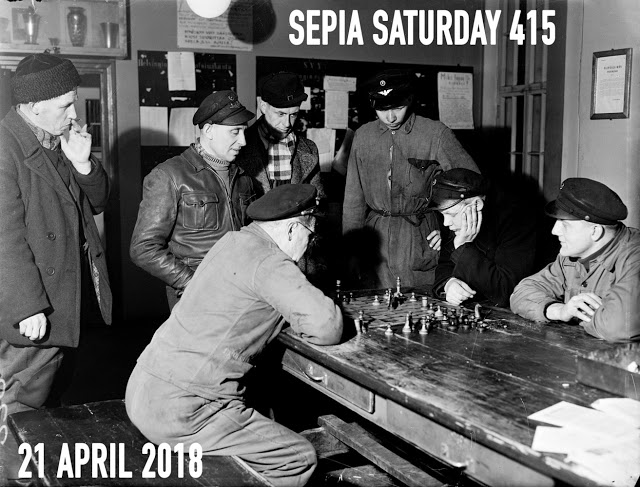 The 2nd bloke on the left, in the photo-prompt on this week's sepia saturday , has a jacket similar to mine !
A totally pathetic attempt to link, but the best i can come up with, as I haven't contributed for a few weeks.......forgive me!
The post title is given by the beautiful Muslim Poet Jalāl ad-Dīn Muhammad Rūmī  جلال‌الدین محمد رومی(30 September 1207 – 17 December 1273)

https://en.wikipedia.org/wiki/Rumi Me & Cathy walked along the canal path between Mytholmroyd & Hebden Bridge yesterday.See the full gallery here https://zimnoch.smugmug.com/Mytholmroyd-Canal-Path-April-20-2018/
Also. We have arranged to go around Manchester next Friday with my Brother Zyg &My  Sister-in-Law Jean.
We introduce  them to Chetham Library   http://library.chethams.com/
& attend a music recital at the Stoller Hall http://stollerhall.com/

So.We go see/look/touch/ Karl Marx's desk
And  John Dee's work
And the burn mark of the devil's hoof!
"......Dee lived in Chetham's School - then Christ's College, home to the priests of the Church - and a table from Dee's time there still exists in the Audit Room.
It bears evidence of a story which blew up around Dee and eventually put paid to his term as warden. Upon it is a circular burn mark - a mark which, it is said, was made by the hoof of Satan, after Dee summoned him to seek advice and wisdom....." [read more]


*Just a couple of days ago peoples momentum
launched their new website*
Friday the 13th ;Simone Felice released his new album.
Saturday Me & Cathy booked tickets to see him play at The Deaf Institute in Manchester on May 10th.It's the 3rd time we will have seen him play..... Today I went canvassing for the Labour Party in Mytholmroyd.
Its the first time I have knocked on doors since 1983.
I had got an extra email yesterday saying a "special guest" might appear at Mytholmroyd Community Centre during our Saturday's lunch break .
I wondered if it might be Jeremy Corbyn?
.It turned out I was right (throughout the morning we wondered if he would actually turn up,given the overnight bombing of Syria)
But he did(via Huddersfield) Even though it was short notice & secret 'word of mouth'
The hall was packed. A fine man who will be the next British Prime Minister. He had a few choice words for Mr Trump.
A Video of Jeremy Corbyn entering the building just 200 yards from where we live .
Jeremy Corbyn told us today in Mytholmroyd that Theresa May had rung him late last night to say she was bombing Syria immediately........
"What do think?"She asked him
"What do you think I think?" he replied...........
Ancoats 2015
Hebden Bridge 2014
at April 14, 2018 2 comments:

Me & Cathy went to a Labour Party Fund Raiser at Arden Road ,Halifax on Friday night.
14th April I will begin canvassing for Jeremy Corbyn's Labour Party in Mytholmroyd.
My teeth are on the mend........ 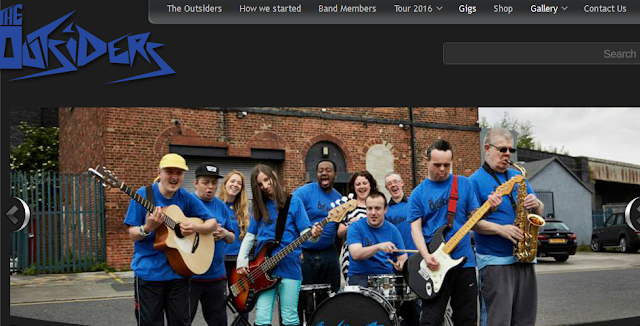 A massive Shout Out to The Outsiders from Leeds.
Who were the first of the night's 4 acts.
They sang probably the best political song I have ever heard live.
Bravo!
at April 07, 2018 2 comments:

Once Brexit comes, we can,finally,  make those "Pedostrians" fuck off
yea?
Thank you Cathy for taking this photo & thank you for your vigilance
.Dont you ever let those  bastards grind you down.......you are worth a  million of them. 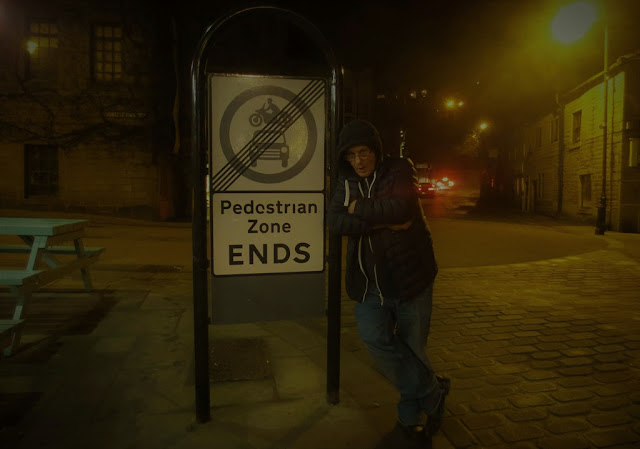 One of the things I miss most about retirement is not being able to moan at work about being "a bit poorly"
.I was never off-sick.
Instead,I used to find comfort in going into Work and whinging to everybody about what a brave soldier I was.......!
'cant do that no more.
I will have to blog about it instead...you lucky buggers!
This week I seem (i think) to have developed a tooth/gum abcess.I guess  i need to do something about that. .......
Anyway. I renewed my Labour Party membership last week.I dropped down to £2 a month as I'm now an O.A.P.
Given all this bollocks against Mr Jeremy Corbyn I must begin to be more active in the local party and  join Momentum
By the way Don.Thanks again for the Bob Dylan 'jesus' CD's.
I guess you saw BBC Arena .?  It was even better than I had expected it to be Bob Weir & Phil Lesh.Radio City Music Hall, New York: March 3, 2018
A few photos of when me Don & Margaret went to hear/see  Bob Weir in Manchester (what year was that? no date on the album)  [here:]
at April 01, 2018 No comments:

perfectly aligned with the zeitgeist 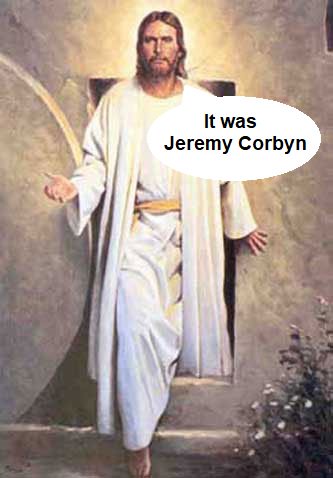