Dearest Not Fade Away 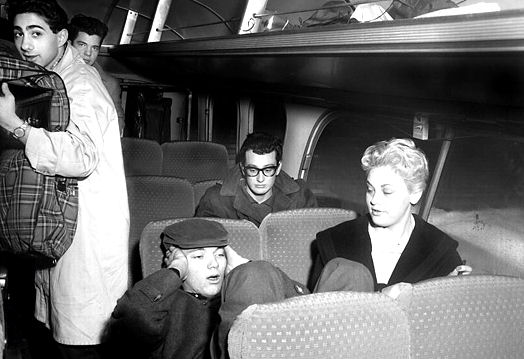 When I Was 9 my big brother Zyg bought me my first L.P. It was "Buddy Holly's Greatest Hits".This was the early 60's ,after Buddy died + just before The Beatles & puberty kicked in )
These days, Holly  reminds me of Short Trousers:Chilblains (whatever happened to them? when I Lived In A Cardboard Box In The Middle Of The Road, some nights,they were all I had to keep me warm......):Being in love with Anne Haw (what A name!)who sat in the desk in front of me at Saint Mary's Primary School (i had the "hots" for her in a very pre-puberty/Catholic way):Rugby League:National Health Service glasses (those wee ones like John Lennon wore): etc etc.
ah Nostalgia!
As I lost my religion, sat in Confession , I didn't hear Latin no more ,the voice from that old rugged cross  was   Buddy Holly & His Chirping Crickets !
Anyway, out at the end June is this album of Holly covers.Featuring Lou Reed;Nick Lowe;Paul McCartney:My Morning Jacket:The Black Keys (above);Pattie Smith;Fiona Apple ;Julia Casablanca: & many more.Here are Florence & The Machine singing "Not Fade Away".

My Best Wishes To The Teachers who are having the first of their one day strikes next Thursday I was an NUT rep in Bradford in the mid-1980s when that Evil old whore Maggie Thatcher   (spit)was La Maîtresse Principale. Ah Nostalgie!

Why did the Hebden Bridge chicken cross the road? 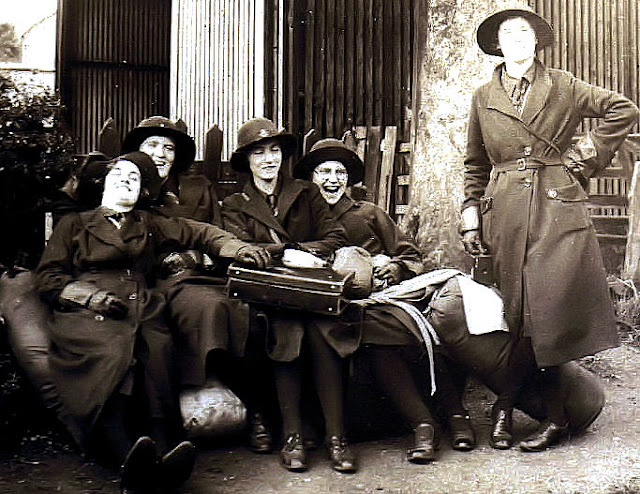 Tweet
Hey Folks! It's my Aunty Brenda again! [2nd right] .This photo she labeled "Weekend Camp".I'm guessing wildly but I think it's in Essex (where she was at college) Maybe late 20's \Early 30's? A time when England still had an Empire & people rehearsed by putting on uniforms & prepare for another invasion.
I am currently reading "The Resurrectionist" by James Bradley. Interesting reading.I quote this about when the Brits first arrived in Australia and how they appeared to The Locals....
"'They thought us spirits once' he says,not turning in his saddle 'they took the colour of our skin for the pallor of the dead and imagined us their ancestors,lost and wandering in the living world once more."

My mind turned to Iraq+Afganistan
And So It Goes........................
I have created a new blog this week.With Inevitable  originality , I am calling it HEBDEN BRIDGE. You are welcome to visit it.I don't know if anything will come of it.I would like,eventually ,it to be as good as Joanne Casey's I Have Seen The Whole Of The Internet .She searches the Internet for interesting,quirky,amusing items & reposts them in one nice place.I would wish to do the same albeit specific to my hometown.

I live in Hebden Bridge.But,despite mentioning Hebden hundreds of times this blog,it  doesn't seem  to have touched the local internet-radar.For example ,if you visit Chris Radcliffe's hebdenbridge.co.uk  local "Blogs & Columns" you wont find my blog.
As I move beyond Hebden Bridge (Im thinking of my semi-move to Italy) I would like my vanity & fascination with Hebden seen just a little bit more........
So the idea is to have a separate blog.One that Google will recognize.Showing the quirky side of a quite particular place.Ideally.Eventually.Hopefully .it would be nice if ,whenever someone includes  the term "Hebden Bridge" in their Google Search,one of my alternative Hebden Bridge stories will be in the top ten results. Maybe it will one day..although,in the great scheme of things W.T.F.!
Hebden Bridge was a dead on its feet Yorkshire mill town in the 1960's.Then the hippies moved in.The place is now the Islington of the North.We have a split community.We locals found ourselves  aboriginals .....our  culture dismissed by trendy articulate middle class Southerners.[ a.k.a Bourgeoisie]
If you think I'm exaggerating ,check out  the movie Shed Your Tears And Walk Away[2011] About a split community & how Hebden Bridge has one of the highest teenage suicide rates in Britain.
The local trendy Orange Book liberalz are so articulate that  their alien  culture just drowns out the indigenous  community.

And So It Goes...............
Ironically+ Hypocritically ! I was drinking posh coffee in Hebden this morning with Shelley (over from Ireland).
'Helping her & Mick Promote their business in Italy. Today,we set up new facebook & twitter pages.She told me that ,a week on Sunday, they are placing a 4 week national advert in The Observer .It all looks good & I am happy to help.Watch this space.

A poptastic music video shot in Hebden Bridge. in 1986 Interestingly enough,me&cath moved into Hebden from Halifax in April 1985.But (before you ask!)That aint me on the Space-Hopper!
at June 25, 2011 22 comments:

it only rained a little bit!

here are my photos.

raining on our parade? 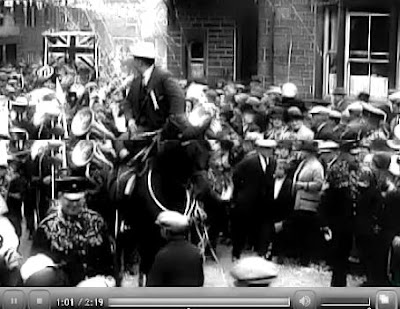 Here is a still from a 1924 black&white silent movie of The Hebden Bridge Carnival.Click Here to Watch It.
Over the past 4 years it has morphed into The Hebden Bridge  Handmade Parade.
The weather forecast for this year's parade on Saturday isn't that clever. 11 15 degrees & rain!Keep your fingers crossed that it ain't so!

Tweet
I will add my photos from this year's Parade here over the weekend.In the meantime here are My photos from 2010 & 2009
This Is A Sepia Saturday Post. 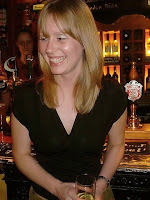 I heard from Leanne (left) this week.We worked together a few moons ago in Halifax.She now lives +works in the Deep South.
She & other   good people from Barnsley Social Services are taking part in
The Barnsley Kilimanjaro Charity Trek 2011 helping to raise money for a local Hospice.Good Luck To All Concerned.
For my music this week I was going sneak in Dylan singing  about being
"I’m ready to go anywhere, I’m ready for to fade
Into my own parade, cast your dancing spell my way
I promise to go under it....................." Until I Saw This Rather Groovy Parody...........

[Don,I got an email this afternoon telling me PJ Harvey plays The ManchesterAcademy2 in September.we are thinking of going.You&Margaret interested/available? I will email details in due course.]

Do you fancy doing a little Market Research for me? This website appeared on the web about 24 hours ago.It's more-or-less finished, but it needs a bit of tweaking in terms of colour/font/layout etc.I would appreciate anyone taking a look & giving some critical feedback.(truly) how do you think it looks?Dont Worry! I didn't do it so you wont hurt my feelings!
You might know I bought a small/cheap place in Italy.Well Mick & Shelley (see website) are starting a business there in the splendid Abruzzo Region..Painting:Photography:Creative Writing Residential Workshops.(They already have a Painter from Hebden Bridge on board to deliver some Courses).I said I will help a little .Both with the courses themselves (I will be paid a salary for this) Also, out of the kindness of my Heart, I am organizing advertising;promotion & suchlike.It's kinda nice because it ties in with my Abruzzo Caper and I am not investing/risking any of my own monies in the venture.Let Me Know Your Thoughts.
This Week's suggested theme at Sepia Saturday is 'Trains' but I don't really have any old photos with them featured.The nearest is this one of my son Chris in The Dominican Republic when he was wee.

Tweet
Instead.Consider this............
When Joseph-Nicephore Niepce took the first photograph in 1828, his photographic plate required an exposure of eight hours. That exposure time was drastically reduced across the course of the nineteenth century, so that by the 1890s the Collodion process had cut exposure times to two or three seconds.

Nevertheless, a three second exposure meant that subjects had to stand very still to avoid being blurred, and holding a smile for that period was tricky. As a result, we have a tendency to see our Victorian ancestors as even more formal and stern than they might have been.Retronaut
see more photos here & here


"Train" is mentioned (somewhere!) in the  lyrics of the video below.
"If the clouds don’t drop and the train don’t stop........."Bob Dylan:Basement Tapes
POSTSCRIPT in this old post I tell you how I am related to George Stevenson the very famous Victorian railway geezer! They even have a statue of him outside Euston Station in London.Although,as I recall, he's not even smiling ......